The ABC’s overtly leftist and unashamedly biased-against-Israel Middle East correspondent Sophie McNeill has found a champion in the form of The Australian newspaper’s Israel-bashing John Lyons.

To quote the Guardian Down Under , in “his Middle East memoir Balcony Over Jerusalem” Lyons claims


‘he was subjected to consistent pressure from the Australia/Israel and Jewish Affairs Council (AIJAC) while based in Jerusalem for the Australian for six years, as were the ABC’s Sophie McNeill and the veteran ABC correspondent Peter Cave….

In 2015, AIJAC sent a file on McNeill to Jewish members of the ABC board, including the then chairman James Spigelman, and this file claimed among other things that she was unsuitable because she had said “one of the saddest things I’ve seen in my whole life is spending time filming in a children’s cancer ward in Gaza”.

The then ABC managing director Mark Scott ordered a detailed response from corporate affairs, which he took to the board.

“I will not cower to the AIJAC,” Scott said, according to Lyons.

Scott was also forced to defend McNeill from attacks at Senate estimates after the dossier was sent to key parliamentarians.

“Before this reporter set foot in the Middle East, there was a campaign against her personally taking up that role,” he said in response to a question from senator Eric Abetz.

“I am saying that she is a highly recognised and acclaimed reporter … she deserved that appointment and she needs to be judged on her work.”

In a letter to the board, Scott wrote: “The article [by AIJAC] demonstrates to Sophie McNeill and the ABC that her every word will be watched closely by AIJAC and she starts on the ground with this key interest group sceptical. We are all aware she will be under even closer scrutiny now. As they seek to influence our coverage, this is a pre-emptive ‘shot across the bows” …..’


“For more than 20 years, Australians have read and heard pro-Israel positions from journalists, editors, politicians, trade union leaders, academics and students who have returned from the all-expenses-paid Israel lobby trips. In my opinion, no editors, journalist or others should take those trips: they grotesquely distort the reality and are dangerous in the sense that they allow people with a very small amount of knowledge to pollute Australian public opinion.” 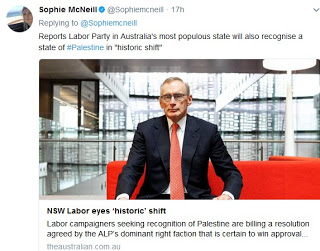 (What his opinion is of trips sponsored by APAN, the Australia Palestine Advocacy Network, is not reported.)


“We did put together a public document explaining why we thought Sophie McNeill … was an inappropriate choice for Middle East correspondent for the taxpayer funded ABC, with its statutory obligations of impartiality.

Everything we do – critiquing media stories; contacting editors, politicians and journalists and explaining our point of view to them; writing our our letters and op/eds; making complaints – are absolutely normal elements of deliberation and debate in a democratic society.

I would call on those who oppose our views, including Mr Lyons, to engage with different views in a democratic, tolerant and constructive spirit, rather than demand, as he appears to be doing, that those who disagree with him be silenced or suppressed.”

The ABC is Australia’s equivalent to the BBC: a national broadcaster upon which objective reporting is incombent in return for public funding, in the ABC’s case not out of a licence fee but out of taxes.  But, again like the BBC, it is in the grip of the arrogant repulsive Left, and it promotes its leftwing agenda at will, thumbing its nose at critics and packing the panel and the audience to “flagship” programs such as Q&A (its version of the BBC’s Question Time) with a surfeit of leftists.  In fact, if anything, its current affairs output and what it chooses to report and comment on is more brazenly leftist than the BBC’s.

Sophie McNeill came to journalism and the ABC from a background of political activism and a determination to continue to pursue that activism.  This is how, six years ago,  she described her view of a journalist’s role:


“If you just try to frame stories from the point of view of the people who are really suffering in a situation, be it in Lebanon, if you re hanging out in a Palestinian refugee camp, [or] in Gaza you re hanging out, you know, at the children’s cancer ward. One of the saddest things I’ve seen in my whole life is spending some time filming in a children’s cancer ward in Gaza. I just think if you just – if you look at a situation and you just – yeah, I guess just try to spend time with the people who are – who really don t have any power and it is hard, you know, for them to have a voice. Then that’s, yeah, that’s the kind of journalism I want to do…. Everyone knew what was happening in Gaza … you saw all the horrific videos … a lot of people died … there are no excuses any more…”


“Any reporting by an ABC employee, including McNeill, is required to follow the following standards:

4.1 Gather and present news and information with due impartiality.

4.2 Present a diversity of perspectives so that, over time, no significant strand of thought or belief within the community is knowingly excluded or disproportionately represented.

4.4 Do not misrepresent any perspective.

4.5 Do not unduly favour one perspective over another.”

In a substantial article, he traced and analysed historic broadcasts by Ms McNeill that reveal her pattern of blatant partisanship in reportage concerning the Middle East.

He also drew attention to her pro-Palestinian activism.


‘[I]n 2013, McNeill, along with prolific pro-Palestinian photographer Richard Wainwright were the only journalists presented to speak at the Human Rights in Palestine Conference at the ANU [Australian National University] …

Here, the content of the story she filed, which was about Lebanese mistreatment of Palestinians, was in itself not problematic. What is a problem, however, and what should have given ABC pause when choosing McNeill for her current job, is why McNeill chose to work with a website whose raison d’être is to increase popular support for the elimination of Israel and routinely publishes material justifying Palestinian terrorism against Israeli civilians.

Finally, in 2009 … and again in 2013, McNeill initiated online campaigns to raise money for her “dear friend” and Gaza fixer, Raed Al Athamneh. Raising money to help someone you work with through a crisis is not necessarily inappropriate. But for a journalist to adopt the Palestinian narrative in their pitch for donations most certainly is.

For example, she wrote “most of Gaza’s residents are refugees who used to live inside Israel’s borders, but were forced out when the country was created in 1948″.

This revisionist historical narrative that Israel forced out all the refugees – language used by her mentor Pilger – represents an endorsement of the Palestinian narrative that Israel is entirely responsible for the refugee problem, ignores the fact that the vast majority of Palestinians fled and were not forced out and ignores the war that was launched against Israel by the Arab nations and Palestinians who rejected partition.

In this essay, she also made an allegation that Israel “collectively punished” the Palestinians of Gaza, describing the blockade of Gaza as a means of punishing the Strip’s residents who support Hamas. [Emphasis added]

She initiated a fundraising campaign for Raed again in 2013, according to her friend and Australian Gazan Patrick Abboud and an appeal she posted on ABC Triple J Hack’s Facebook page.’


‘Her reporting does not show a clear record of separating her media career from her activism..

And there is little doubt that her activism continues and influences her reporting in terms of how she frames stories, particularly about the conflict between Israel and the Palestinians. …

What makes this matter even more serious is the fact that the Jerusalem bureau is undergoing changes. While until now there were two ABC Middle East reporters (most recently Hayden Cooper and Matt Brown) as well as some support crew, the ABC says that it is making Jerusalem a Video Journalist bureau later this year. That move, it would appear, would give McNeill substantially more autonomy than previous Middle East correspondents have had.

The onus now lies on O’Neill [sic] to demonstrate that ABC management was not irresponsible in making the appointment – given her self-described dedication to frame stories from the point of view of the people who are “really suffering” (in her lexicon, the Palestinians) – and whether she can possibly fulfil the statutory obligation of an ABC correspondent to present news with due impartiality and to be fair to all perspectives.’

Is it any wonder, given her continuing partisanship, that advocates of fair and objective reporting were, and continue to be, dismayed by her appointment to the ABC?