The Philistines, of course, were a seafaring people of the Aegean islands.

They were one of the rivals for regional dominance competing with the ancient Israelites along the eastern coast of the Mediterranean Sea over one thousand years before Jesus of Nazareth walked the land.

They were, needless to say, not a people from the Arabian peninsula and were in no way the forebears of those who conquered the Land of Israel in the seventh century.

This is to say that the ancient enemy of the Jews, the Philistines, are in no way related to the contemporary Arabs who have, for some reason, taken a Latin name that refers to a Greek people.

The areas of Judea and Samaria, and all the Land of Israel, was renamed Syria-Palestina by the Roman Emperor Hadrian around the year 135 CE for the explicit purpose of erasing Jewish history on the land of the defeated indigenous Jewish population upon the failure of the Bar Kochba Rebellion.

From that day to this the traditional homeland of the Jewish people was generally referred to as either “Palestine” or the “Holy Land” or “Eretz Israel,” depending upon among who, when, and where the conversation was taking place.

Throughout the first half of the twentieth-century a “Palestinian” was generally considered a Jew or, in official British terms during of the period of the mandate, anyone, without regard to race or religion, who resided within the mandate, itself.  This definition, in my opinion, is probably the only one that actually makes sense from a liberal perspective.

As is often remarked, the Jerusalem Post was originally dubbed the “Palestine Post.”  It was not until after the Jews relinquished the designation of “Palestinian” that the local Arabs picked it up. This is why Golda Meir could famously tell the the Sunday Times in the summer of 1969:

This is because “Palestine” was a regional, not a national designation.  The above quote is sometimes employed by the hard-left to suggest that Meir was racist, but the hard-left considers Israel to be a racist country, in any case, and all of its leaders from the past, including Golda, herself, to be fascistic. 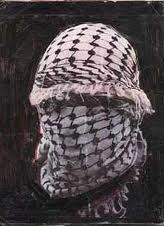 The idea of “Palestinian” to refer specifically to the local Arabs only gained significant credence among Arabs, themselves, during the 1960s with the rise of Arafat and the PLO and with it, for the very first time in human history, an allegedly distinct ethnicity emerged for the specific purpose of robbing another people of sovereignty and self-defense on their own land.

For the Jewish people, therefore, the keffiyah resonates in a manner similar to a Klansmen’s hood.

In a certain kind of way, this answers the question of just what is a “Palestinian,” anyway?  You could accurately answer like this:

A “Palestinian” is an Arab residing on Jewish land whose cultural identity is largely dependent upon the effort to eliminate Jewish sovereignty and self-defense in Eretz Israel directly after the Holocaust.

All more or less the same.

The reason for this is because Palestinian-Arab nationalism was merely a recent response to the fact that the Jews had finally released ourselves from dhimmitude and we would simply no longer allow ourselves to be forced into second and third-class non-citizenship under Arab-Muslim domination.

Thirteen centuries was more than enough, thank you very much.

The truth of the matter, of course, is that “Palestine” is simply another name for the Land of Israel, but one foisted upon it by a malicious Roman conqueror.  Just as Jewish people have no moral obligation to recognize a “Palestinian” people who came into existence, as an allegedly distinct people, within recent decades for the specific purpose of doing Jewish people harm, so we have no compelling reason to resurrect the Greco-Roman name “Palestine” to refer to our homeland.

If the Arabs want to take a big bite out of Israel in order to create a criminal-terrorist entity on Jewish land, we’ve certainly given them every opportunity, but as Abba Eban famously said after the Geneva peace talks of 1973, the Palestinian-Arabs “never miss an opportunity to miss an opportunity.”

The same is true for everyone who lives in the Land of Israel.  They are all “Palestinian” in the sense that they all live in what was the British Mandate of Palestine.

A “Palestinian” might be an Arab and he or she might be a Muslim, but there are all sorts of “Palestinians” who are not Arab. The Palestinian Authority is willing to accept the idea of an “Arab Christian” as “Palestinian,” but that is where the door shuts closed. All others, despite residing in the region for perhaps generations, can never be considered “Palestinian” in the hard-right racist manner that the PA determines such things.

The Arabs may represent a significant portion of what was once the British Mandate of Palestine, but they obviously never represented all of it.  The Jews were always willing to share, just as the Arabs were always determined to prevail in a zero-sum contest against their formerly persecuted subjects.

But if one is an all-or-nothing kind of person and if you cannot grab it all, you very often get nothing.

This is something that Mahmoud Abbas might well keep in mind.

Michael Lumish is the editor of Israel Thrives and a regular contributor to the Times of Israel and the Elder of Ziyon.