In a demonstration of how the Sephardi interpretation of halacha (religious law ) can often be more practical than that of Ashkenazi Orthodox rabbis,  fourteen Sephardi rabbis passed a ruling that the Passover seder can be held this year via video conference to allow family members  isolated from one another to celebrate together. The Times of Israel reports: 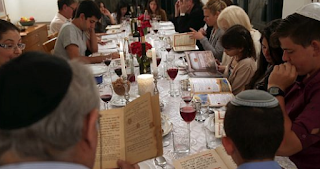 The rabbis argued that there is a precedent, given that Shabbat laws can be put aside to give medical treatment even when patients are not in a life-threatening situation.

“Just as it is permissible for a non-critical patient to receive treatment on Shabbat in order to cure him of illness, such is the case here,” the rabbis wrote, giving the okay for the retelling of the Exodus story via Zoom or other videoconference software.

They were responding to a question they had received about the use of Zoom on Seder night to connect elderly relatives to their families in “a time of emergency,” and stressed it was a one-off dispensation granted in view of the extreme current circumstances.

The rabbis outlined three potential problems with using the software to observe the festival custom: turning on an electrical device during a holiday; committing a “secular act” during the holiday, which could cheapen its value; and the fear that the practice would continue in the future, when it was no longer necessary.

The rabbis addressed the problems by referring to previous rulings by Sephardic and North African religious authorities that allowed using electrical devices on similar occasions, and by specifying that the devices needed to be turned on before the start of the holiday and left on throughout. They made clear that during the present crisis, using the software helped fulfill a mitzvah (commandment) for families to celebrate the festival together.

The ruling said that the allowance would address “the need to alleviate sadness from elders and the needy.” The rabbis emphasized that “it’s clear to everyone that the ruling is for a time of emergency only,” and that young peoples’ connections to their grandparents are an essential part of many Seders.

While lenient religious rulings in Israel are often backed by rabbis from the liberal wing of Orthodoxy, this statement appears to be backed by more mainstream figures, although none are Ashkenazi. They include Eliyahu Abergel, head of Jerusalem’s rabbinical court, local rabbis such as Kiryat Gat’s Chief Rabbi Shlomo Ben Hamo, and yeshiva rabbis such as Eyal Vered of Jerusalem’s Machon Meir institution.