Salon published a piece originally in Undark that describes the difficult life of a leading Gazan astrophysicist – without mentioning that he identifies as a Hamas member and his brother was a major Hamas terrorist.

[A]strophysicist Suleiman Baraka’s life’s work — along with that of his students and mentees — illustrates the promise and challenges of astronomy in Gaza.

Baraka studies space plasma, the electrically-charged soup of ions and electrons that constitutes the vast majority of space. And he creates kinetic models that simulate how these charged particles in solar wind interact with the magnetosphere of the Earth. He holds a part-time appointment at the National Institute of Aerospace in Virginia, and he also has a teaching position in Gaza, at al-Aqsa University. Colleagues around the world have praised his efforts to bring astronomy to Gaza.

Baraka graduated in 1987 from al-Quds University in East Jerusalem with an undergraduate thesis on the formation of black holes and an offer to study astrophysics at the Australian National University in Canberra. ….
He never made it to Australia, though this isn’t unusual. Scientists in Gaza are “essentially isolated,” says Robert Williams, an astronomer and former president of the International Astronomical Union. In 2010, Williams attempted to enter the Gaza Strip to attend an astronomy event, but was denied entry. And even within the West Bank — the Palestinian territory not under blockade by Israel — it is difficult for scientists to travel from one place to another, due to checkpoints and travel restrictions.

Really? Any examples of how Western scientists were stymied in traveling through the West Bank? No, just a commonly accepted “fact.”

In 2008, almost four decades after first seeing Neil Armstrong walk on the moon, Baraka started his fellowship as a post-doctoral researcher for the National Institute of Aerospace — the closest a foreigner can ever get to working with NASA.

But three months into that appointment, a rocket tore into his house in Gaza, destroying his father’s books and critically injuring his 11-year old son, Ibrahim. The boy was transported to an Egyptian hospital, where doctors tended to shrapnel wounds in the left side of his brain. Baraka says he flew from Virginia to Egypt and sat by his son’s bed for four days until his son’s body was sent back to Gaza in a coffin. 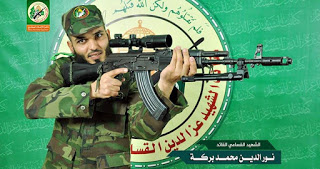 Probably because Salon doesn’t mention that the Baraka family is Hamas.

Suleiman’s brother Noor, a cleric, was a field commander for the Qassam Brigades in 2008 when this rocket attack occurred. He was killed in 2018 after a firefight with the IDF.

Suleiman himself had been arrested twice by Israel. He told the reporter that one arrest was for helping foreign journalists report on the region, and one for secretly teaching Palestinian students. That was accepted as truth in the article.

But as YNet notes, Suleiman has admitted to more than that:


Recently, Suleiman gave a speech at a Palestinian TED event and received loud applause from the Gazan audience as he recounted his life-story in the Arab world. …. “But in the end, like my brother Nour, I belong to the Izz ad-Din al-Qassam Brigades,” he said.

Yes, a Palestinian who has reached the heights of fame for his scientific work also identifies as a member of Hamas’ “military wing” that is responsible for the deaths of thousands, and no one wants to mention that.