In the Megillah, we will that in the face of the antisemitic threat of Haman, Esther and the Jews found an unlikely ally in King Achashverosh, who originally supported Haman in his plan to kill the Jews.

Apparent enemies of Jews can become allies, or at least find common cause.
It is a recurring theme in Jewish history.
And it is what Theodore Herzl believed.

In his book, Zionism: The Concise History, Alex Ryvchin notes that while Herzl became keenly aware of the strength of antisemitism, he felt that there were antisemites who could be allies and help provide a homeland for the Jews. He turned to antisemites such as Germany’s Kaiser Wilhelm and Russia’s Foreign Minister Vladimir Lambsdorff. Herzl calculated that such men were so eager to rid their countries of the Jews that they would support the establishment of a Jewish state and thereby rid their respective countries of the Jews they did not want. Some of these leaders did see a benefit in supporting political Zionism for just that reason.

This was the realpolitik that guided Herzl in seeking alliances with apparent enemies, in the interests of reaching his goal. Eventually, Herzl realized that such leaders could not be counted upon to act in good faith and were in fact fundamentally opposed, if not outright hostile to Jewish rights.

For this reason, Herzl shifted his search for allies to Great Britain.

However, Netanyahu has gone one step further than Herzl, and has arguably succeeded where Herzl did not.

While the growing ties between Israel and some of the Arab countries in the Middle East is in the news, Netanyahu has also developed key alliances with Hungary, Poland, the Czech Republic, and Slovakia — the Visegrad Group.

But not without controversy.

Netanyahu has been making overtures to Eastern Europe, to countries that during WWII were not only accessories to the Nazis, but in some cases actively helped the Nazis kill Jews and even went so far as to kill Jews on their own initiative.

The issue is more than past history. Even today there are accusations of antisemitism against leaders such as the Hungarian Prime Minister Viktor Orban. He has been accused of antisemitism for his attacks against George Soros and his right-wing government has been accused of rehabilitating wartime figures as anti-communist icons and minimizing their complicity in deporting and killing Jews.

An article in The New York Times put the contradiction of Viktor Orban like this:


He is a far-right leader of a country whose Jewish citizens say they face less harassment than Jews in any other part of Europe. Mr. Orban and his party, Fidesz, have used anti-Semitic tropes to promote his vision of Hungarian nationalism, and have been accused of trying to understate Hungarian complicity in the Holocaust — even as he has bankrolled many Jewish institutions and causes.

Meanwhile, Poland is still trying to play down its role during the Holocaust.

Whatever else these four countries gain by allying themselves with Israel, they get what might arguably be called a “kosher seal” that deflects claims that they are antisemitic.

In return, Netanyahu has gained a way of blunting, to a degree, the attacks by the European Union against Israel.


o In 2017, when the UN General Assembly voted overwhelmingly to reject the US recognition of Jerusalem as Israel’s capital, Hungary abstained.

o Hungary joined the Czech Republic and Romania in blocking a European Union statement that criticized the US Israeli embassy moving to Jerusalem.

o In November 2019, the EU failed to get all 28 member states behind a joint statement condemning the US decision to no longer consider Israeli settlements as illegal. It was blocked by Hungary, which meant that instead of a joint statement, the EU was reduced to a statement by then-EU foreign policy chief Federica Mogherini

o In January, the EU again failed to get a consensus, when it tried to unanimously condemn Trump’s peace plan

o Hungary and the Czech Republic are also among the countries that will file an amicus brief with the ICC in response to ICC chief prosecutor Fatou Bensouda’s statement in December that there was enough evidence to investigate alleged war crimes by Israel.

And then there is Bernie Sanders, cynically creating alliances with antisemites — who are not merely critical of Israel, but also demonize it, accuse it of being supremacist and accuse those who support it of having dual loyalty.

This is a different kind of ‘realpolitik’.

Like Herzl, Sanders is not out to change his allies such as Sarsour, Tlaib, Omar or any of the other antisemites that he has gone out of his way to ally himself with. But while Herzl’s goal was to channel the influence of powerful antisemites to establish a Jewish state to save the Jewish people, Sanders accepts the endorsements of these people while they continue to attack and demonize Israel. There is nothing about such associates that in any way helps Jews in general or Israel in particular.

We never hear Sanders publicly challenge what they say.
On the contrary, Sarsour, for example, is a surrogate whom Sanders has chosen to actually represent him and speak on his behalf.

At least Herzl realized that people like the Kaiser could not be relied upon to act in good faith. Sanders shows no interest in what his “allies” say against Israel, so long as they strengthen his ‘progressive’ creds.

In the process, Sanders — a self-proclaimed ‘proud Jew’ —  acts as a shield for these people, for their attacks against Israel and against those who stand up for it.

While one can argue that Netanyahu provides a shield for leaders who engage in antisemitic themes, it is undeniable that those same leaders have been instrumental in frustrating a number of the EU’s attempts to attack and isolate Israel.

Sanders, on the other hand, is distant from his fellow Jews.

And now Bernie is becoming even more distant — 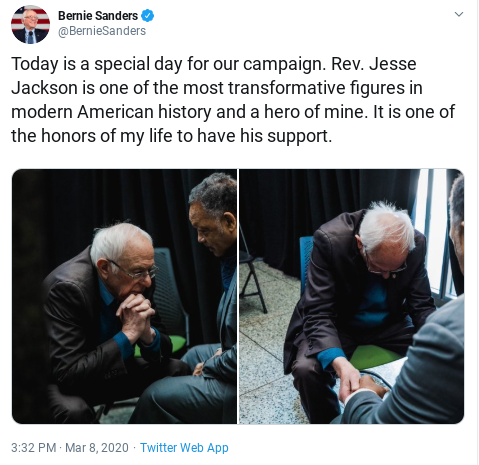 Whatever one may criticize about Biden’s gaffes, it appears that Bernie Sanders  — in distancing himself from both his ‘Jewishness’ and his fellow Jews — is also becoming increasingly difficult to watch.