An Egyptian newspaper has reported that Yemenite Jews in the Kharif district have been arrested  and dispossessed. There is no way of verifying this report, as it is not known how many Jews still live in the areas. The bulk of the remaining Jews were living in a compound in the capital San’a but it is claimed that most of these were allowed to emigrate to the USvia Elder of Ziyon): 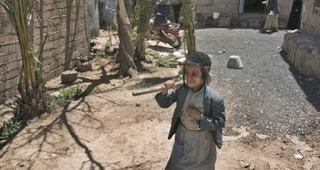 According to  an Arab media report, pro-Iranian militia is stepping up its attempts to ethnically cleanse Yemen of its last remaining Jews. The pro-Iranian Houthi militia has begun arresting the remaining Jews in the Kharif District, the Egyptian Al Mesryoon newspaper reported Monday.

According to the report, after arresting the Jewish residents, the Houthis forced them to sell their homes, their land, and all their properties to Houthi leaders. The militia has also pressured them to leave Yemen.

Al Mesryoon further reported that Yemen’s small Jewish community has faced systematic discrimination and human rights violations from the Houthis, who have cut off water and electricity from Jewish homes and prevented Jews from going out to purchase food. The Jewish community of Yemen is one of the most ancient in the world.