TOP NEWS
http://jewishrefugees.blogspot.com/2020/11/remembering-beggars-of-casablanca.html
The vast majority of Jews in Morocco were poor and lived in the Jewish quarters of Moroccan cities. Casablanca was no exception. Bob Oré Bitbol recalls the scene in the Mellah. Here is an extract of his piece for Dafina, translated from the French. (With thanks: Leon)

In my street with its uncountable mezuzoth – there were so many – the “poor” were permanently on parade.

Not including the Arab musicians, the jugglers, the trapeze artists, the Gnawas, the bambaras, the monkey trainers, even a nun who had lost it, poor darling, asking for money to redeem Jesus Christ, may God keep you! Added to that appeals for Israel, the Alliance school, the little blue white blue JNF boxes, the Scouts, the Community Center, the Alliance Circle, the Union Circle, the OSE, the Golden Age, La Goutte de Lait, the abandoned children, Mme Bengio’s orphans, and so on. There was enough to send our parents who had a hard time making ends meet, into a frenzy! 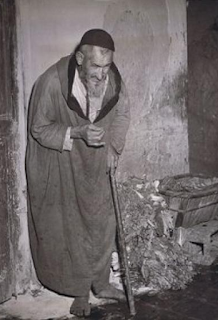 Still, we had no illusions. The less poor had to help the poorest! In short, it was a vicious circle, although I hesitate to call it such. Apart from a few rare extremely rich people, everyone struggled as best they could. We had barely left the mellah and ten children per family was the norm. The popular feeling was one of resignation. One would make it out of there.
The women gave birth like rabbits. Pregnant, breastfeeding, pregnant again. A cycle of eighteen months never ended And then there was religion, mark you. It’s God’s will ! And excuse me m’sieur or madame, I beg your pardon but we do not defy the will of God ! Understand?
My mother was intelligent and confident, but even she did not escape this aberrational state of affairs. She found it unfair but had to reluctantly submit. Be aware that she loved her children, no question, but as a feminist before her time she rightly deplored her enslavement. Whether she wanted it or not, she had to accept it.
Husbands were inflicted on them. The number of children was decided by God himself, all-present and all-powerful. The parents were caught in the middle. The beggars who came to ask for their share which I now understand may have been too much. But at the time I only saw the terrible misery of the other and my heart was squeezed and torn.
Already I dreamed of being a billionaire one day to overcome all these injustices, all this misfortune, all this poverty!
“Our poor man” was called Yahya. He was tall, with a plentiful salt-an- pepper beard, a little black tarbush to match his faded djellaba. He was half-blind, no doubt a victim of trachoma which raged frequently. He held in his hand a reed instead of a cane and prayed non-stop. We didn’t understand him but he seemed sincere. My mother was pushing him to bless us! She was not going to give away her precious money without getting something in return, if only a small blessing!
Yahya was accompanied by a young boy with lively eyes, his little son no doubt, who said nothing and held his other hand. Yahya chanted fervently, his eyes half-closed, his hand twisted with arthritis on our pretty little children’s heads!
If another rabbi passed at the same time as him, he waved him away unceremoniously. It was his neighborhood, these were his clients, his own Jews. There was no way to share them with anyone else.
Shoo, shoo, go away! I tell you! Followed by a few words in Arabic and Hebrew that I didn’t understand.
A peaceful and pious rabbi was transformed into a wicked, fearful and ruthless man. The other had better walk away without asking for his rest.
Abdallah the blind man came to sing under our windows. His voice, of exceptional purity, flew up from the courtyard where we lived to the neighbouring terraces, the sky, the stars, to God himself. Everything was still. A great religious silence took hold. Even the sparrows and swallows fell silent.
His heartbreaking song still spoke of hope for a better life. He accompanied himself on a .lute. I think at this point everyone wanted to believe his words, didn’t they? The coins were raining down in our courtyard, with a pleasant musical tone. Instinctively he knew how to find them. He missed not one. He sang another happy song to thank us, and removed himself. And for a moment, a brief moment, peace reigned over the world.