TOP NEWS
http://elderofziyon.blogspot.com/2020/11/abbas-tells-macron-that-no-one-should.html
French President Macron spoke to PLO head Mahmoud Abbas on the phone on Monday.
According to the official Wafa news agency, Macron emphasized his desire for a two-state solution. But then Abbas said his opinion on the cartoon controversy:

President Abbas stressed during this telephone conversation the need for everyone to respect religions and religious symbols and not allow anything offensive to Prophet Muhammad and all prophets and religions while condemning all those who do so. He stressed at the same time his rejection of extremism, violence and terrorism, wherever it came from and in whatever form.

As usual, Muslim leaders couch their demands of what dhimmis and infidels must do in terms of being tolerant to all religions. But in the end it is still a demand that non-Muslims follow Muslim law in determining what is allowed and not allowed – they want to prohibit any image of Mohammed anywhere in the world, no matter how inoffensive.
What about wanting to protect all religious symbols?
Well, the holiest place on Earth according to Judaism is the Temple Mount. There are very specific rules as to where people are allowed to visit, what they are allowed to wear and what they are allowed to do.
But Palestinians play soccer there – which is a direct insult to Judaism and a gross violation of Jewish law. 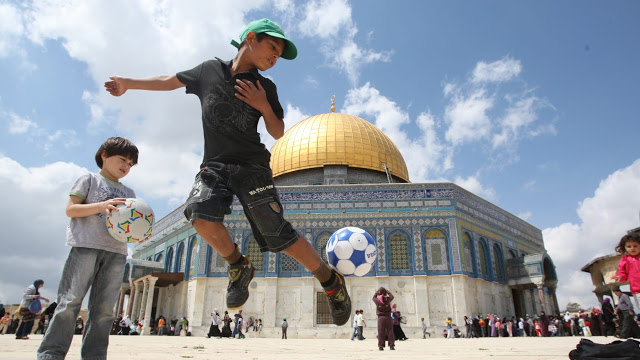 What happened to Muslim respect for other religions?
Where was the Palestinian outcry to this cartoon distributed by Palestinian NGO Badil, which used a Jewish menorah in its antisemitic theme? 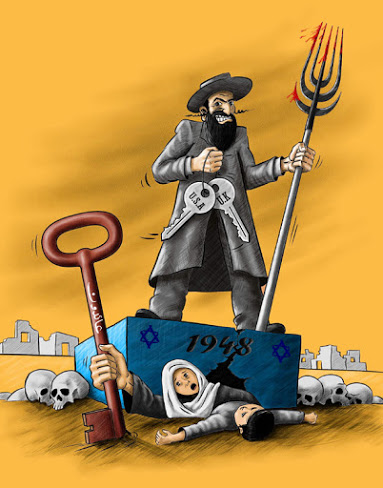 I have never seen any Palestinian respect for Judaism as a religion or Jewish symbols. Gazans enthusiastically destroyed synagogues left behind after Israel withdrew, and I do not recall any objection from the Palestinians. 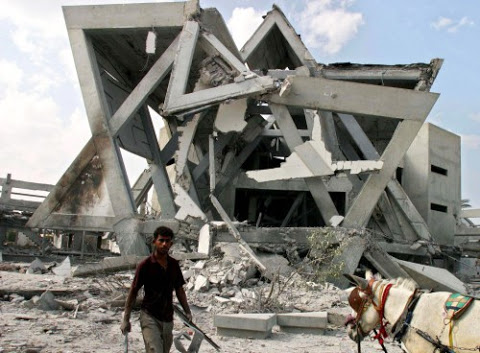 So when Mahmoud Abbas insists that Muslims respect all religious symbols – he’s not telling the truth.