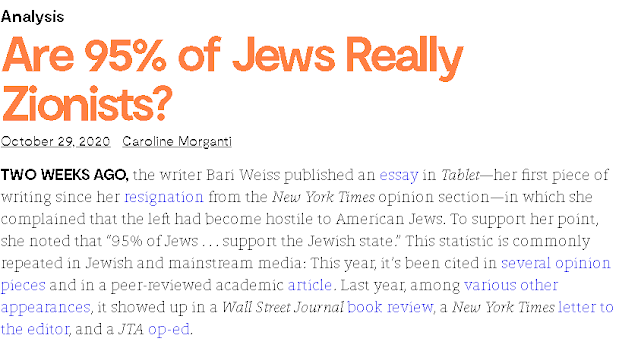 Jewish Currents, the hard-Left socialist site for which Peter Beinart is an editor, has an article by Caroline Morganti  that attempts to disprove the oft-cited figure that 95% of American Jews are pro-Israel.

Its main point is that the 95% number came from a series of Gallup polls with a very small sample size of 128 Jews among a much larger survey of Americans, so it has a large margin of error.
This is true. But when you look objectively at all of the data gathered in this article, you see that it still largely holds up.
Most surveys of American Jews do not ask whether they are “pro-Israel.” They ask whether they have an emotional attachment to Israel. The wording is important, so let’s look at the major surveys of Jews – all of which are accurately described in this article, even as it tries to spin the results.

Being emotionally attached is obviously a higher bar than just being pro-Israel, although Morganti absurdly tries to argue that many people might be emotionally connected because they hate Israel so much:

But what about respondents who are highly critical of Israel, but for whom their relationship with the country nonetheless comprises a significant part of their Jewish engagement? Could questions about “closeness” to Israel elicit confusion among respondents who might feel close on the basis of lived experiences, personal relationships, or political engagement, but simultaneously feel distant based on political alienation, or even deeply held moral objections to Israeli policy?

There is, of course, zero evidence that people would answer that way.
Far more interesting is this 2018 Mellman poll of Jewish voters:

5% had no answer, but one cannot argue with the conclusion that only 3% of American Jews identify as “generally not pro-Israel.” That is pretty tiny! And few of them would describe themselves as “anti-Zionist” which means that the percentage of anti-Zionist American Jews is ridiculously small.
A similar poll done by Mellman for the Ruderman Foundation among all American Jews, not just voters, gave similar results with slightly higher numbers for the “generally not pro-Israel” question:

The results showed a significant difference in the percentage of respondents who chose a pro-Israel option. In the Ruderman poll, about 80% of the general sample of American Jews chose pro-Israel options as opposed to the average of about 90% over the three JEI surveys of American Jewish voters.
The pro-Israel answers in the Ruderman poll included a relatively even split of those who were supportive (23%), critical of some (28%), and critical of many (29%) Israeli policies. Six percent were “generally not pro-Israel,” and 14% did not have a view.

It is no surprise that younger Jews are less invested in Israel. But the anti-Zionists, many of whom write for Jewish Currents, like to pretend that anti-Zionists are a significant percentage of American Jews – and that simply isn’t true. Out of the 6%,  chances are many or most of those would not actively identify as anti-Zionist. There is a big difference between “generally not pro-Israel” and actively being against the existence of a Jewish state.
Given this overwhelming evidence that anti-Zionism is a fringe opinion, Morganti makes up her own theory based on a question asked in 2018 in an AJC poll:

The AJC survey included a question that it had never asked before: “Can Israel be both a Jewish state and a democracy, and if not, which should it be?” Around two-thirds of respondents (68%) answered yes, Israel could and should be both Jewish and democratic. But about one-fifth (20%) of American Jews said, “No, it should be a democracy.” (A further 7% said, “No, it should be a Jewish state,” and 4% had no opinion.)
In other words, when asked directly whether Israel can reconcile its Jewishness and democracy, roughly 20% of American Jews (the margin of error was plus or minus 3.9%) said that Israel cannot be both, and that it should be a democratic state rather than a Jewish state—an answer that might be considered a non- or anti-Zionist position by contemporary standards.

That is incredible wishful thinking from Israel haters. Most of the people surveyed probably never thought much about the issue before the question came up; it is just as likely that the ones who answered “democracy” assumed it would have a Jewish majority anyway so the Jewish part of the question was not considered. Or perhaps they were thinking in terms of whether Israel should have personal issues follow Jewish law. Without followup questions, it is impossible to know what those 20% felt, but assuming that they are anti-Israel is quite a stretch.
Perhaps saying that 95% of American Jews support Israel is too high. No doubt many are becoming agnostic about Israel as they drift from identifying as Jews altogether.
But one thing are clear: Even though the question was not directly asked, the number of Jews who identify as anti-Zionist is tiny compared to the numbers who support having a Jewish state.