It was an extraordinary sight testifying to the effectiveness of Dumisani Washington’s Mizrahi Project:  pro-Palestinian activists were visibly moved by what they saw and heard at a ‘Night to Honor Israel’, as Jews from Arab countries told their harrowing stories. Pastor Washington posted the following on his Facebook page:

“Some 15 Students for Justice in Palestine (SJP) members came to stage what amounted to a silent protest at the CUFI On Campus at UTSA – The University of Texas at San Antonio event tonight. Some came with their mouths taped shut, and some holding signs smearing Israel with apartheid, hate…the usual canards. However, the event was the Night to Honor Israel, and the theme? 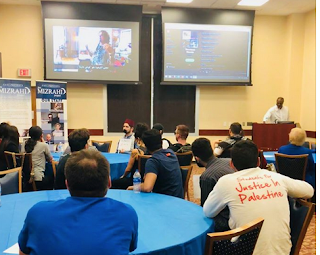 Pro-Palestinians at the Mizrahi Project presentation ‘were impacted and will not forget what they heard’, according to Dumisani Washington

The over 850,000 Jewish refugees from North Africa & the Middle East. The Mizrahi Project.

Yes. These students sat silently and watched the PragerU video, “Why Are There Still Palestinian Refugees” and heard how the UN and Arab leaders have been using the Palestinians as pawns for decades.

They watched as Hillel Neuer of UN Watch demanded that the Arab state leaders answer the question, “Where are your Jews?!”

They listened to Elie Nounou tell how he attended Cairo University with Yasser Arafat, who already had a deep hatred of Jews – long before calling himself a Palestinian and forming a terrorist organization that feigned concern for them.
They sat in rapt attention as David Suissa told how his grandfather escaped from Morocco, and how Jews from all over the world are returning to Israel for a “family reunion.”

And they watched Hila Oved Brog explain how her parents did not allow her family to hate Libya or Germany from where here father’s and mother’s families were expelled after losing everything.

They sat and listened. The expressions on many of their faces were betraying. They were touched. They were impacted; so much so that even when I opened the floor for questions, they sat there and either stared blankly or simply looked down. They were completely unprepared for what they heard. They will not forget it. There is no doubt in my mind that some of their hearts have already begun to turn.”

Rap by Ari Lesser about the Jewish refugees from Arab countries