Iraq has become less democratic, not more, since the 2003 invasion, an Iraqi Jewess told thousands of TV viewers of a live discussion programme last week.

Born in Baghdad, Niran Basson-Timan accepted to take part in the programme The Day after on al -Sharqiya TV to give her view on the topic : Whither democratic change in Iraq?

Speaking from London, Niran Basson-Timan, who fled Iraq aged 16 in the 1970s, argued that Iraq had gone backwards since the overthrow of Saddam Hussein and his Ba’ath regime in 2003.

The Iraqi constitution discriminated against Jews because the 1950 and ’51 denaturalisation laws overrode any option Iraqis had to recover their citizenship, she claimed. 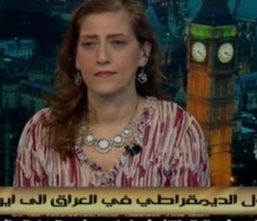 Niran Basson-Timan as she appeared on Sharqiya TV

To illustrate her point, Niran produced her British passport. Even if she did not renew her passport for 20 years, she would not lose her British citizenship. On the other hand, leaving Iraq meant forfeiting her Iraqi citizenship after two months. “Citizenship is a right, not a gift,” she declared.

Al Sharqiya is a popular Iraqi TV channel. It is, however, controversial, because its owner is a known sympathiser of the Ba’ath party.

Nevertheless, Niran agreed to take part in the programme: “I wanted my voice to be heard and I did not want others to edit what I wanted to say.”