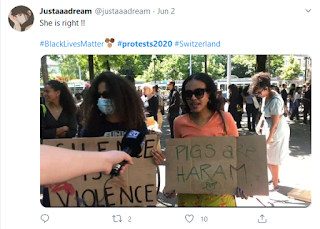 Remember the ’60s?  Remember how radical lefties in America routinely dubbed police “pigs”?  Well, it seems the insult may be returning, at least of this Swiss Black Lives Matter demonstrator has her way.

George Floyd was a career criminal and, as Candace Owens, herself black, has argued, not the most wortht black person to be cast as a hero in the eyes of African Americans, his death was an outrage, and his killer deserves no sympathy.

Of course Black Lives Matter.  But so too do all lives. Including White Lives, despire the demonisation of white people which is proceeding apace and is being abetted by radical whites themselves, and by police and politicians who participate in the sickening spectacle of bending the knee to atone for their “white privilege”.

It’s hardly surprising that there is much anger in Australia at the holding of BLM demos in city centres today with bloody-minded disregard for social distamcing.  An arrogant young (white) demonstrator even said on camera that the deaths of a few hundred people from Covid-19 as a result of the demo would not matter, since the deaths of Aborigines in custody is so much more important.

The state of New South Wales had attempted to ban the Sydney demo, but the state Supreme Court court overturned the ruling.  In Victoria, the government of dictatorial far left premier Dan Andrews asked protesters not to proceed with the demo, but let it go ahead anyway, despite having more draconian amti-Covid 19 measures in place than any other state.

The antisemitic and anti-Israel of sections of the Black Lives Matter movement is, of course, well-knowm, and in New York American activist Linda Sarsour, and Muslims in Brooklyn have shown their solidarity with the protests over the death of George Floyd. 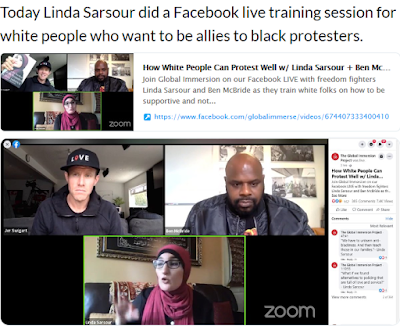 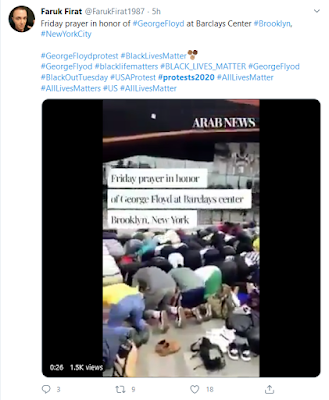 It’s all grist to the mill of anti-white racism. Moreover, we are accustomed to hear of the trans-Atlantic slave trade, and there is in comparison little awareness of the enslavement and brutalisation of Africans by Muslim Arabs.  Yet, as a recent article by Larry Elder in the Toronto Star reminds us, quoting a Ghanaian scholar, John Azumah:


“While two out of every three slaves shipped across the Atlantic were men, the proportions were reversed in the Islamic slave trade. Two women for every man were enslaved by the Muslims. While the mortality rate of the slaves being transported across the Atlantic was as high as 10 per cent, the percentage of the slaves dying in transit in the Tran-Saharan and East African slave market was a staggering 80 to 90 per cent.

While almost all the slaves shipped across the Atlantic were for agricultural work, most of the slaves destined for the Muslim Middle East were for sexual exploitation as concubines in harems and for military service. While many children were born to the slaves in the Americas, the millions of their descendants are citizens in Brazil and the United States today. Very few descendants of the slaves who ended up in the Middle East survived. While most slaves who went to the Americas could marry and have families, most of the male slaves destined for the Middle East were castrated, and most of the children born to the women were killed at birth.

It is estimated that possibly as many as 11 million Africans were transported across the Atlantic, 95 percent of which went to South and Central America, mainly to Portuguese, Spanish and French possessions; only 5 per cent of the slaves ended up in what we call the United States today. However, a minimum of 28 million Africans were enslaved in the Muslim Middle East. Since at least 80 per cent of those captured by the Muslim slave traders were calculated to have died before reaching the slave markets, it is believed that the death toll from 1,400 years of Arab and Muslim slave raids into Africa could have been as high as 112 million.”