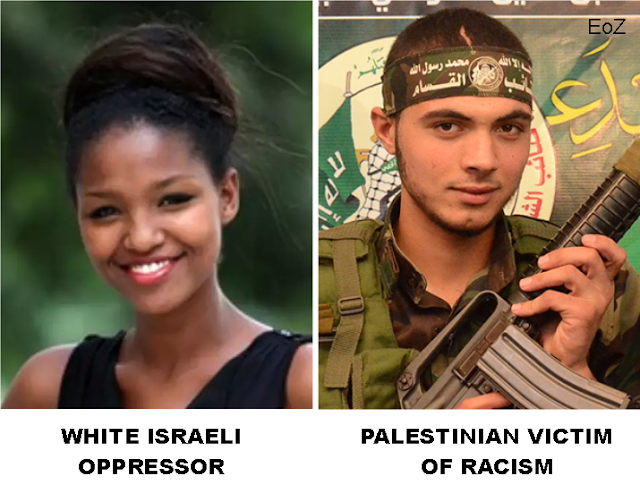 I received an email from the US Campaign for Palestinian Rights, about Angela Davis receiving a human rights award. In the email it says, “Palestine is a racial justice issue, and Dr. Davis’ insistence that the Palestinian people be included in that vision of justice qualifies her for the award all the more.”

There is nothing remotely racial about the conflict between Israel and the Arab world, including Palestinians. After all, half of Israelis have some heritage from northern African and Middle Eastern communities and are indistinguishable from Arabs. (European Jews are genetically closer to Middle Eastern Jews than to other Europeans, as well.)

If skin pigmentation is your criterion, there are roughly 100,000 Israelis from Ethiopia who are darker than virtually any Palestinian Arab. Yet they are considered “white” by the bizarre logic of those who want to paint this as a racial justice issue.

Of course there is discrimination in Israel, just as there is in every other country on Earth. But the Palestinian Arabs aren’t discriminated against based on race. It is a political, religious and cultural conflict but there is no racial component – half of Israelis are the same “color.”

The people who want to call this a racial conflict are the racists. Against all visual and genetic evidence, they want the world to view Israelis as the evil “white” oppressors and the Palestinian Arabs as the victimized people of color. If racism is the idea that some people are better than others based on skin color, the anti-Israel racists are demanding that the world hate Israelis based on skin color that most don’t even have!

It is the anti-Israel crowd that is obsessed with race, assigning racial definitions to people purely to incite others to hate them. If that isn’t racism, what is?

I saw a different, more sophisticated and even more deceptive argument about why the Israeli-Arab conflict should be considered a racial justice issue. At the United Methodist Church website, a 2014 article entitled “Why Justice in Palestine Is a Racial Justice Imperative” says:

That seems like a very good point. Article 1, Paragraph 1 of The International Convention on the Elimination of All Forms of Racial Discrimination indeed says that racial discrimination does not only apply to race but also to those other criteria.

However, Paragraph 2 of the Convention rips the argument that this applies to Palestinian Arabs to shreds:


2. This Convention shall not apply to distinctions, exclusions, restrictions or preferences made by a State Party to this Convention between citizens and non-citizens.

Palestinian Arabs are not citizens of Israel, and as such Israel is not required to treat them the same as citizens – just like no nation on the planet gives the same rights to citizens and non-citizens.

It is easy to prove this, since Israeli Arabs have the same legal rights as Israeli Jews, and more rights in Israel than Palestinian Arabs, as they should. They are racially and ethnically identical to Palestinian Arabs so any difference in how they are treated is purely because the Palestinians are not citizens, not because of color or ethnicity or national origin.

The people who are calling “Palestine” a racial justice issue are not only liars – they are the only racists in this discussion.