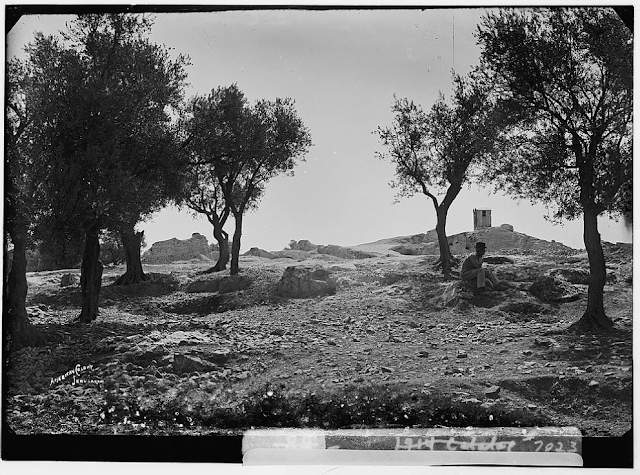 It comes from the Library of Congress Madson Collection of photos. It was taken in 1898 and the caption is “Ash heaps from the Temple sacrifices.”

Lenny adds, “It was real! Outside of Damascus Gate. Discussed in Talmud Yuma 68a as ‘Beit HaDeshen.’ The site was cleared in early 1900s for housing.”

The idea that actual ashes from Temple sacrifices were easily seen only 120 years ago is intriguing. I looked a little further into this and found two fascinating letters about this in the 1855 “Journal of Sacred Literature.”

Discovery of Altar Ashes at Jerusalem.—Mr. James Finn, Her Majesty’s Consul at Jerusalem, to whose intelligent care of literary and antiquarian interests in the Holy Land our readers are indebted for much agreeable information.

Jerusalem, April 2. Outside of this city, towards the north-west, and not far from the Nablus Road and the Tombs of the Kings (so called), are some considerable heaps of blue grey ashes, on which no grass or weeds ever grow. One of them may be 40 ft. in height. They are remarkable objects in themselves, especially as contrasted in colour with the dark olive groves around them. These are commonly believed by the people of the city to be heaps of refuse from the soapboilers’ works of former times. Some of our English residents here, having conceived a different idea of their origin, namely, that it was not impossible they should be ashes from the ancient sacrifices, begged of Dr. Roth, of Munich, when here in 1853, to carry away samples for analysis in Germany, which he did; and Dr. Sandreczki has now laid before the literary Society of Jerusalem an account, in English, of a letter received from Dr. Roth on the subject. After some remarks on the beetles and mollusca which he collected in Palestine, and tendering generous offers of assistance, he proceeds thus: “Hitherto it has been questionable whether the two ash-hills without the Damascus Gate have been heaped up from the ashes of the burnt sacrifices, or from the residuum of the produce of potash in the soap manufactories here. Dr. Roth, who had taken with him two samples, states  that their analysis in our famous Liebig’s laboratory bears evidence to the supposition that those ashes are the remnant of the burnt sacrifices, because they are chiefly of animal, and not of vegetable origin; and even contain small fragments of bones and teeth burnt to coal; and yet it would be impossible to ascertain the species of the animals to which they belonged.’ The analysis exhibits a small percentage of silicic acid, which is never found in the ashes of flesh or bones. Dr. Roth is of opinion that we may account for this circumstance by supposing that the ashes of the meat-offerings in which silicium may be found, were likewise carried off to the hills in question. The samples were taken both from the top and the basis of the larger hill,—not just from the surface, nor from a considerable depth either. Dr. Roth, intends to send the whole account of that analysis, together with a new analysis of the mineral waters near Tiberias.

This almost unexpected result is one that leads to important antiquarian consequences,—not only exciting wonder at the confirmation of Holy Writ, and bringing our feelings back to immediate contact with those of the Aaronic priesthood, but as helping among other facts to determine the course of the ancient walls, since these ashes must have been thrown beyond the wall.— Yours, &c.

The second letter is even more astounding:

The insertion of the above letter in the Athenaeum called forth the following— The Valley of the Ashes.—

Referring to the letter from Mr. Finn, Her Majesty’s Consul at Jerusalem, whose courtesy and hospitable kindness it has been my privilege to share, 1 beg to make one or two remarks.

I visited Palestine in 1852, it having beforehand been mutually arranged with Dr. Robinson that I should meet him there, and accompany him on his journey. Finding, when I reached the country, that our plans and objects did not coincide, I gave up the arrangement; and thereafter visited almost every place of interest, “from Dan to Beersheba,” accompanied only by my Arab attendants.

While at Jerusalem, some remarks of my friend Mr. Caiman, of the London Jews’ Society’s Hospital there, in reference to the mounds to the west of the Damascus Gate, suggested the probability of the view referred to in Mr. Finn’s letter. I proceeded, in company with Mr. Caiman, carefully to examine the mounds; believing that if I were correct in supposing that they were the ashes of the ancient temple sacrifices, proof to that effect might probably be found.

Digging, both at the top and near the base of the largest heap, I was struck with the fact that the whole seemed homogeneous, there being no earth, stones, pottery, or rubbish of other kind apparently mixed with the grey-blue mould. This seemed unfavourable to the popular idea of their being formed from soapboilers’ ashes. Continuing to dig, I was greatly interested soon to find among the ashes, (which appeared to me to be animal, though I never have had them analyzed) small portions of bone, still strengthening my belief that I was surrounded by the remains of the burnt-offerings of Israel during a thousand years. But the proof appeared to amount to demonstration when I discovered, a foot or more from the surface, fragments of bone sufficiently large to leave no doubt as to the kind of animal to which they belonged. I have in my possession a number of specimens, among which is one, three inches long, evidently the leg-bone of a sheep or lamb; another, a fragment of the skull or nose-bone; and two others, fragments of ribs, which it seems impossible to mistake for any other but the same animal. The first mentioned of those specimens has marks, in some parts, of having been charred or blackened by the action of the fire.

Since I returned from the East, I have frequently, both privately and in public, mentioned the above circumstances, and my intention to have the ashes analyzed, that it might be ascertained whether they consisted chiefly of animal matter. Further inquiry on this point is rendered unnecessary by the analysis of Dr. Roth, as stated in the letter of Mr. Finn.

While upon the spot, I was also struck with the light which the position of those mounds seemed to throw upon the vexed question of the ancient course of the city wall. It seemed to confirm the theory of Dr. Robinson, that instead of running considerably within the present city boundary, as is contended for by those who maintain the authenticity of the so called Holy Places,—the ancient wall must have run considerably to the westward of the present Damascus Gate, it being most probable that the ashes would be deposited immediately outside the wall, and not carried so far from it as the heaps are now found.

If these ideas be correct, do they not seem to throw light also upon an expression,—to which I am not aware any definite meaning, as to the locality, has ever been attached,—in the boundaries of the city referred to in Jeremiah xxxi. 40 ?—” the valley of the dead bodies, and of the ashes.” If by “the valley of the dead bodies” is meant the Valley of Hinnom, it seems likely, from the connexion of the passage, that by “the valley of the ashes,” is meant the locality where the ashes are now found. It is not improbable that anciently, when the wall ran close by, there was a descent outside to the westward, accounting for the expression valley, the hollow now being filled up or levelled by the accumulated rubbish of the city’s “long desolations.”

While I am glad that the attention of others has been directed to this interesting matter, I trust that it may not seem uncalled for thus to advert to it, that I may not seem to be entering into other men’s labours, should I ever be able to publish notes of my journey.

Dickson claims to have seen animal bones that were charred in the mound.

A skeptical note can be found in  Dr. William Smith’s Dictionary of the Bible (1877), where he writes that similar mounds were found in Shechem, Lydda, and Gaza, where no sacrifices were made, so he believes the theory that these were refuse from soap manufacturing, without explaining why animal bones would be there nor verifying that the other mounds really were made out of the same material. 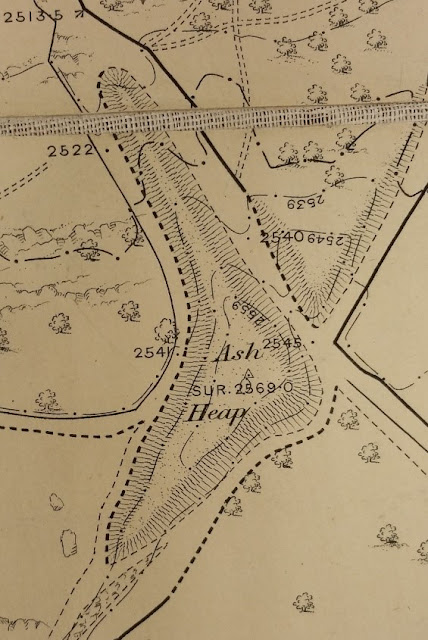 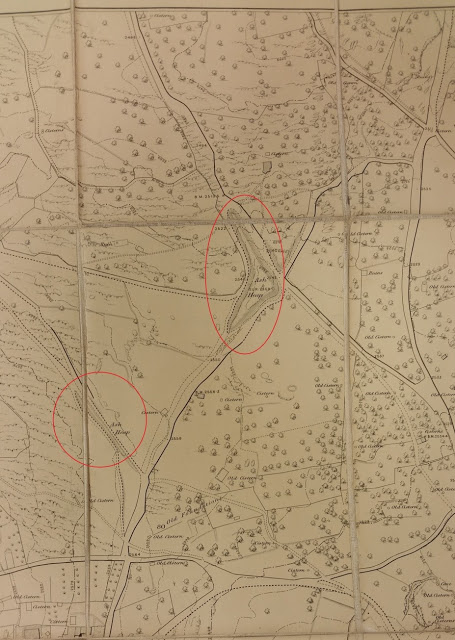 An article in Hebrew about this identifies the locations in relation to the discovery of the buried ancient wall of Jerusalem, discovered afterwards but adjacent to it. The ashes would have been dumped outside the city walls.

Here’s a map of where this is today: 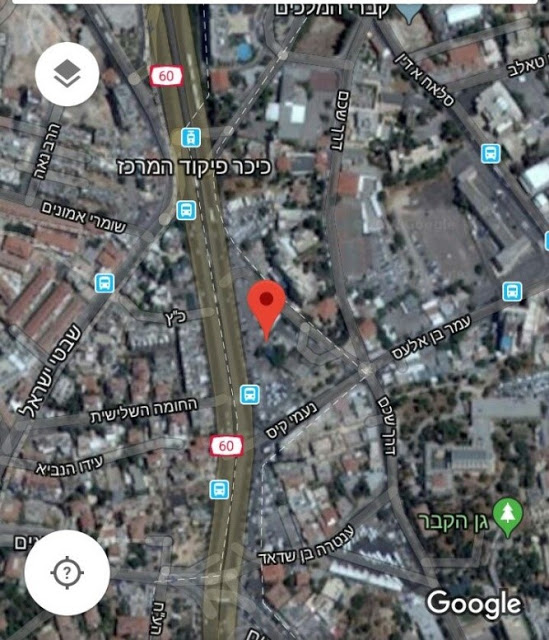 This is what the area looks like now (as close as I could get with Google Street View): 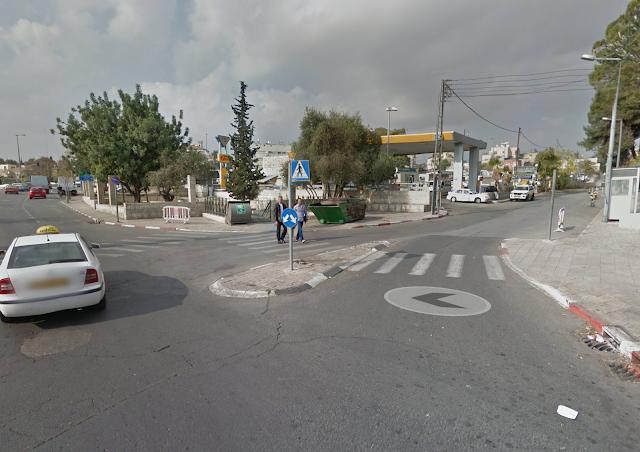 From the other direction: 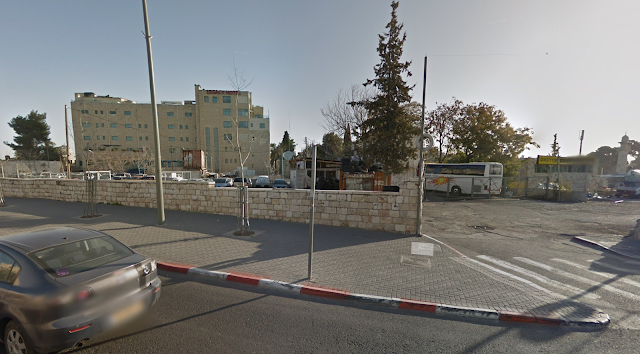 The building is the Legacy Hotel, formerly a YMCA.

A formerly 40 foot high mound of ashes outside Jerusalem seems worth exploring. (By 1898, it was already much lower.)

With Wilson’s maps, perhaps it is worth the Israel Antiquities Authority exploring to see if there   are any residual animal ashes in that area, perhaps in the parking lot.