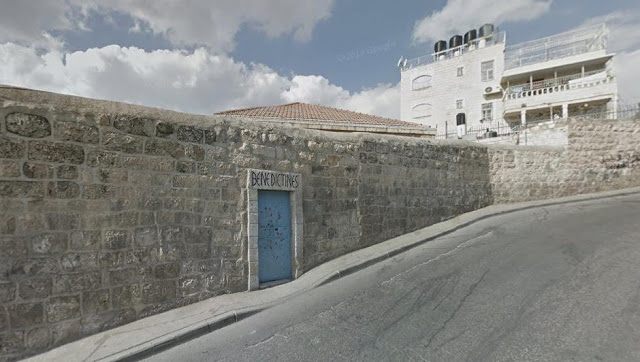 The National Catholic Reporter’s Global Sisters Report has an article on a Benedictine convent in Jerusalem on the road to the Mount of Olives.

Most of the article is about how the sisters there are trying to restore old cisterns to water their olive trees and save thousands of dollars in water bills.

But it also mentions this:


The Benedictine convent is also unique because it is a semicloistered convent in the midst of one of the most impoverished and crowded East Jerusalem neighborhoods. Next door to the convent is a contentious Jewish settlement called Beit Hoshen, run by the group the City of David Foundation, whose ideological agenda is to purchase land in Arab neighborhoods and build heavily fortified Jewish residences, in an attempt to “Judaize” the area. Beit Hoshen is a single building with about 30 people.

“One year before I arrived, the [Beit Hoshen] building was sold,” said Penka. “The [Palestinian] farmer owner lost his life. People don’t like when you sell to Jews” in this neighborhood, she explained.


The location of the Jewish building means the road is now a flash point for riots whenever the political situation becomes shaky. Additionally, the sisters are located on the road toward the Mount of Olives, the holiest place for Jews to be buried, because it is believed that the arrival of the Messiah will come from the Mount of Olives and those buried there will be the first dead to be resurrected. But many Arab residents resent the endless traffic jams from funerals. Angry children and teenagers protesting the Israeli occupation sometimes throw stones at the Jewish people’s cars exiting the cemetery.

Because stoning Jewish mourners is a perfectly valid expression of anger at “occupation.”

These are massive violations of human rights, both Jewish and Arab, from the Palestinians – but no one is too bothered by it. Murdering farmers who sell land, or attacking grieving relatives attending a funeral, is simply how things are done in Jerusalem – no reason for any moral outrage over it.