TOP NEWS
http://jewishrefugees.blogspot.com/2016/12/ministers-call-truce-over-mizrahi.html
The two most senior Mizrahi women in the Israeli cabinet, Gila Gamliel and Miri Regev, have called a truce after weeks of fighting over who should take responsibility for preserving the heritage of Jews from the Middle East and North Africa. The issue, according to this Walla News report, has been declared ‘a national interest ‘. (With thanks: Levana) 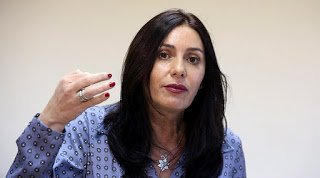 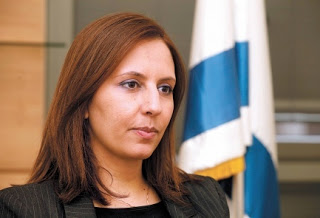 Fighting it out: Top, Miri Regev (whose parents are from Morocco) and bottom, Gila Gamliel of Libyan and Yemenite origin
The government will today debate a proposal submitted by minister for social equality Gila Gamliel , for documenting heritage communities of Jews from Arab countries and Iran. The Ministry of Culture tried to block the program in the past, but now they have reached a compromise.
Likud has become inured to the ongoing battle between the two top women in the party – Minister of Culture and Sports Miri Regev and Social Equality Minister Gila Gamliel. For once, the two political rivals were able to agree a compromise: on Sunday the government’s latest proposal is expected to be put forward : to establish a national program to document the heritage of Jewish communities from Arab countries and Iran –  and Regev is expected to support it.
Two weeks ago, a similar proposal fell off the agenda following the opposition of the Minister of Culture, who claimed that the field was under her aegis.
Tense relations between Regev and Gamliel became a byword in the Likud. The scene of the last tussle between the two, was the ‘Yemenyada’ (Yemenite festival) event in Eilat last August. They then clashed  on who should preserve Jewish heritage from Arab countries and Iran. Late last month, Gamliel organized, for the second year running,  a major evening dedicated to mark the day of departure and expulsion of immigrants from Oriental countries. At the Jerusalem convention center, attended by thousands of participants, Minister Gamliel declared her proposal for a Government-backed heritage center with a database that includes testimonials and stories of Jews from Arab countries.
According to the proposal,  ten million shekels will be allocated over  two years from the ministry’s budget for social equality to set up a large version of  the film archive by Steven Spielberg. The project will include testimonies of Oriental origin and  personal and community biographies, while encouraging academic research on the subject of  Jewish community life in the East and their expulsion.
But ahead of the vote, the Ministry of Culture and Sport gave its opinion, opposing the decision and demanding that the issue be discussed jointly. Gamliel offered   (Miri Regev) an opportunity to endorse her proposed budget and even to add from her own Ministry of Culture budget, but  Regev refused. Gamliel accused her of sabotaging the decision in order to hurt Gamliel’s major event taking place in the same week at Binyanei Ha-ouma in Jerusalem.
Over the last two weeks there were contacts between the two ministries and the two reached a compromise: they will approve the recording of testimonies, while how and where these will be stored will be a decision deferred to a later date.
According to a new resolution, the Government Press Office will operate the project and will begin to build up the collection of personal testimonies written and filmed in cooperation with bodies who are accountable to Regev, including Yad Ben-Zvi and Beit Hatfutzot (the Diaspora Museum) – but it will not include the establishment of a physical heritage center at this stage.
The office of Regev said that the move went ahead after Gamliel promised that the powers of the Ministry of Culture and Sport will not be curtailed. “The initial proposal of the ministry for social equality dealt with a subject under the authority of the Ministry of Culture. After the Ministry for Social Equality  received  comments from the Ministry of Culture, it made the necessary adjustments, and after the usual consultations, resistance has been removed.”
Gamliel welcomed their cooperation and said that this is a shared interest. “After 68 years during which the agenda of the Eastern Jews was pushed beyond the boundaries of the historical canon, it’s time to fix it,” said the Minister, who has been promoting projects for years to instil knowledge and public awareness of the heritage of the Eastern Jews.
“Facts and evidence will ensure that the Jewish story will be brought  out finally in full: East and well as West. It is not uniquely of interest to Mizrahim, it is of national interest, to all Jews and  Zionists. A people who are Chofetz Chaim (who choose life)  had to acknowledge their past and their legacy in a variety of fields, and this initiative to collect testimonies will ensure it. “