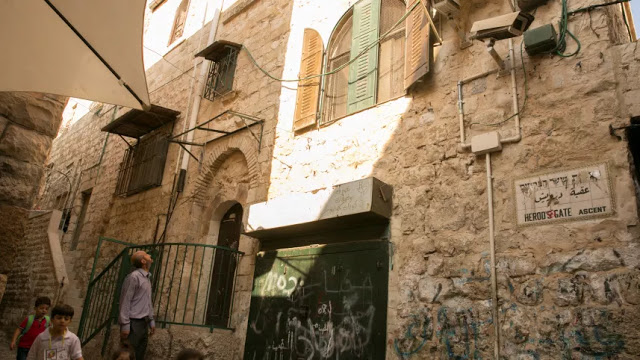 The unexpected revelation that Jews have taken over a Palestinian house in Jerusalem’s Old City has sparked a flood of theories and accusations in the Palestinian media as to who exactly sold the house to them.

Previously the house, which abuts the Temple Mount, belonged to one of the best known and distinguished Palestinian families in the city, the Joudeh family, which has kinship ties with the aristocratic Husseini family. The head of the family is Adeeb Joudeh al-Husseini al-Ghodayya, a well-known figure in the Old City, who – by virtue of his family heritage – is keeper of the keys to the Church of the Holy Sepulchre.

According to reports in the last week, the Joudeh family has wanted to sell the property for some time. About two years ago they agreed to sell it to a man named Fadi al-Salamin, a Palestinian political activist who lives in the United States and is considered to be a crony of Mohammed Dahlan, a bitter rival of Palestinian President Mahmoud Abbas. Salamin is also highly critical of the Palestinian Authority headed by Abbas.

Palestinian sources claim that the PA torpedoed the sale of the house to Salamin, which prompted the Joudeh family to hire a broker named Khaled Atari, who reportedly has ties to senior people in the PA. According to Israel’s Land Registry, Atari purchased the house last April – and on the same day, transferred its ownership to a company registered in the Caribbean, named Daho Holdings.

Six months later, Jews moved into the house and it emerged that dwelling had apparently been acquired by the Israeli right-wing nonprofit Ateret Cohanim. A Palestinian source in Jerusalem claims that Atari received $17 million for the house.

The fact that Jews moved into a house that once belonged to a respected Palestinian family, which is located so close to the sometimes-volatile Temple Mount, has now whipped up an uproar in the Palestinian press and social media. Sources close to Dahlan are charging the PA with thwarting the original deal with Fadi al-Salamin to facilitate the sale to Jewish settlers.

Adeeb Joudeh and Atari have both published ads in the Palestinian media rejecting allegations that they knew of or had been involved in the transferral of the house to Jews, but their messages have done little to assuage the Palestinian street.

In the last week the accusations have become shriller and new names of PA people who may have been involved in the debacle were cited, among them Majid Faraj, head of Palestinian intelligence, and Adnan Husseini, governor of Jerusalem on behalf of the PA.

Faraj has been mentioned as a possible successor to Abbas as PA chairman; his association with this affair arose because Atari is considered to be one of the intelligence chief’s cronies. As for Husseini, by virtue of his position, he should have given his approval for the transaction. In a tape making the rounds recently, Husseini is heard calling Atari a “reliable person.”

Meanwhile, Sheikh Ikrima Sa’id Sabri, imam of the Temple Mount’s Al-Aqsa Mosque, renewed the fatwa forbidding the sale of assets to Jews, and threatening “anyone who furtively transfers an asset to Jews” with excommunication. Upon death, the fatwa elaborates, the body of such an individual “may not be washed, wrapped in a shroud, prayed over or buried in a Muslim cemetery,” according to the 0202 East Jerusalem news website.

To give an idea of the reactions, Archbishop of Jerusalem Michael Sabah called the sale of a single building  to Jews a “moral and national disaster.“

The idea that Jews cannot buy houses in their own capital, in their holiest city, next to their holiest site, is not outrageous or antisemitic or even strange to the world.

The Joudeh family is yet another prominent Palestinian Muslim family who ar not indigenous. They come from the Hashemites and were in Mecca in Mohammed’s time.

The Jews that bought the house for an exorbitant price are more indigenous to the area than the Arab colonizers they bought it from.

(I have yet to find a single Palestinian Muslim family who did not come to Palestine after the time of Mohammed. There are some Christian families who trace back to Roman times, but there seems to be a fair chance that they are Jewish converts from after the fall of Jerusalem.)

This story, of Arabs selling houses to Jews but trying to hide that fact, has been told many times over the past 90 years.