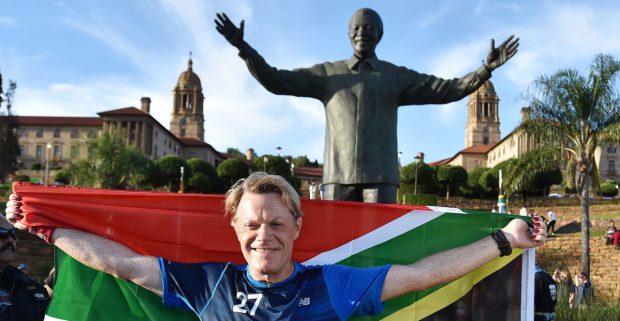 Here’s the best way for BDSers to alienate their biggest supporters.

Arrived for my gig tonight in Tel Aviv https://t.co/C6oSpxWCgM and then run the Palestine Marathon on Friday … https://t.co/6GMDntcrOQ

But according to BDS leaders, he will not be running in the marathon tomorrow:


Artists for Palestine UK (APUK), whose Artists’ Pledge for Palestine has over 1200 signatories, has been campaigning for British comedian Eddie Izzard to withdraw from his projected March 30 gig in Tel Aviv.

Izzard, known for his progressive views and loved for his outspokenness on a whole range of issues, has – surprisingly – so far declined to comment; but on March 28 he posted a Tweet saying he was looking forward to playing Tel Aviv, and running in the Palestine Marathon the day after:

Now Palestine Marathon organisers have sent back his registration.

APUK commented: ‘It’s hard to believe that someone as politically aware as Eddie Izzard should imagine he could get away with this.   He should know as well as anyone that you can’t hunt with the hounds and run with the hare – particularly when the hare in this case is the squeezed and besieged Palestinian population, under illegal military occupation by Israel.   Quite rightly, they’ve declined to indulge his patronising desire to run with them the day after he entertains their oppressors.   We wish he’d listened to us sooner and avoided this humiliation.’

I don’t think Izzard is the one who is going to be humiliated by this.

If this is true (BDSers don’t have a reputation for being truthful), this will backfire on Israel-haters big time. Izzard will have a blast in Tel Aviv and then what do you think he will be tweeting? That he is sorry?

Izzard is as liberal as they come. A person who could have been a great advertisement for “Palestine” is instead being insulted for not hating Israel as much as these boycotters demand.

It will be very interesting to see how this plays in British media – and how Izzard will react himself. I cannot find a way that this will make the BDS crowd look good.