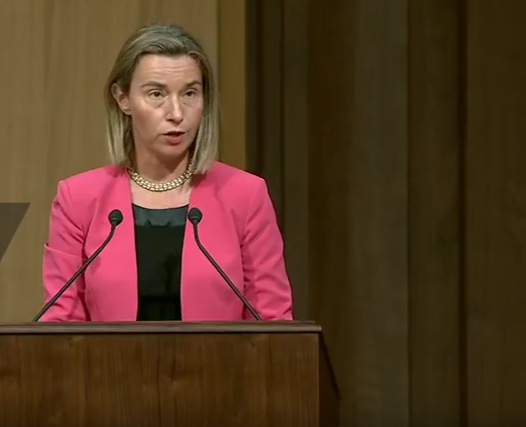 Read what EU High Representative/Vice-President Federica Mogherini said during her speech to the Arab League summit, and see where Israel fits in her vision:

But later she does address the specifics of peace between Israel and what she calls “Palestine”:


I would like to start from a just and lasting peace between Israel and Palestine. This is and will continue to be a top priority for the European Union. A peaceful solution of this conflict, or even progress in that direction, could set a whole new paradigm for cooperation in the region, including on security. We firmly believe that the two-State solution remains the only realistic way to end the conflict and all claims. We would recognise changes to the ’67 lines* only when agreed by the parties, including with regard to Jerusalem.

So the EU is saying that unless somehow the Palestinians voluntarily decide to compromise with Israel, the EU will stand behind them 100% that they deserve every inch of the territories they claim.

Israel’s security? Israel’s interests? The thousands of years of Jewish history in these areas? All meaningless.

I discussed this with [the Palestinian] President, [Mahmoud] Abbas just days ago in Brussels. We will continue to work for the unity of the entire international community to this aim, including with our American friends, as we have started to do in these days.

You don’t have to read very far between the lines to see that the maximal Palestinian demands are regarded as the baseline for peace, and any Israeli conditions for peace and security are regarded as obstacles to peace.

Mogherini could have said that there is an opportunity for Israel to work with its Arab neighbors towards real regional peace and against Islamic extremism. She could have painted a picture of Israeli scientists helping solve medical, agricultural and water issues throughout the region. She could have acted like a leader.

Instead, she meekly said exactly what the Arabs wanted her to say, not showing the slightest daylight between the mindset of conservative, antisemitic Sunni Arabs and European liberals.

That cowardice in speaking the plain truth to the Arab world, and expecting them to act like responsible human beings,  is a good part of the reason the region is unstable.

(If you want to laugh, see what Mogherini said after speaking with Abbas a few days ago: “I would also like to thank his leadership and his commitment when it comes to non-violence, when it comes to the difficult work he is doing against incitement and also of maintaining the Palestinian people, and especially the Palestinian youth, committed to peace and to cooperation in the region.”)

* The written transcript of the speech says “1967 borders.” Her actual words in her speech were “’67 lines.”