Israel’s National Library has unearthed a telegram from Hitler’s deputy Heinrich Himmler to the Mufti of Jerusalem.

Believed to have been sent in 1943, it contains a promise by Hitler’s deputy to Haj Amin al-Husseini that the German Reich will stand behind the Arabs of Palestine and support their struggle against “Jewish intruders.”

Published on the library website on Wednesday, the telegraph notes that the struggle against world Jewry has been a principle of the German National Socialists from the start, and that the regime has always followed “with particular sympathy,” the struggle of “freedom-loving Arabs,” especially those in Palestine battling the Jews.

“The National-Socialist movement of the great Germany has made its fight against world Jewry a guiding principle since its very beginning,” Himmler wrote. “For that reason it [the movement] has been closely following the battle of freedom-seeking Arabs- and especially in Palestine- against the Jewish invaders,”

“The joint recognition of the enemy and the struggle together against it are what build the solid basis between the National Socialists of Greater Germany and freedom-loving Muslims of the world,” Himmler wrote.

The telegram concludes with the SS chief sending the mufti his warm greetings on the “unhappy” anniversary of the Balfour Declaration and best wishes for the continuation of the struggle. 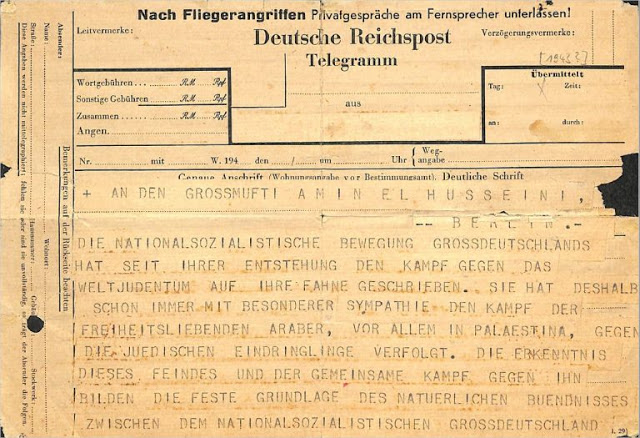 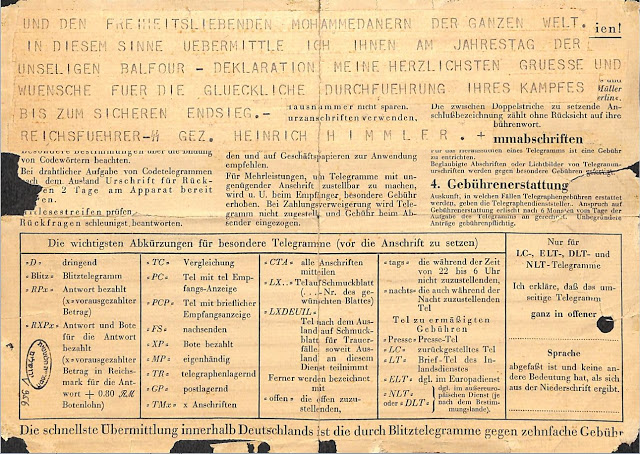 You can be sure that no Arab in the 1940s would ever protest against Nazi Germany by claiming that they were only against “Zionists,” not Jews.

The language of this letter is identical to the language used in Arab media to this day about Jewish “usurpers” in the land of Israel.