I came across this billboard in Jerusalem advertising luxury apartments to the employees of the potentially 200 countries that might move their embassies to Jerusalem: 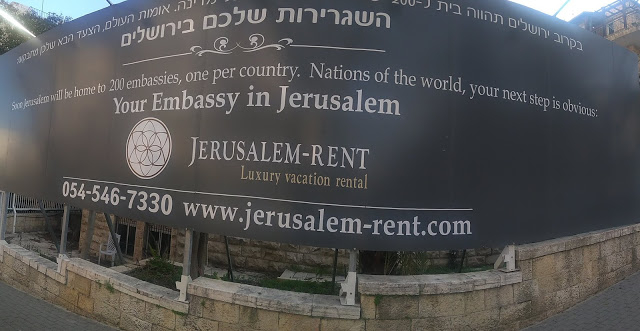 Although the ad is somewhat tongue in cheek, it isn’t completely a joke.

There are taboos on the other side, although the analogy isn’t great. Ilhan Omar’s bringing up AIPAC has given an excuse for the critics of Israel to mainstream an antisemitic meme of Jewish control. The New York Times wrote a bizarre article featuring someone who was framed as a major AIPAC official but in fact has not been associated with the group for years. The person was quoted as implying that AIPAC would ensure that the new crop of progressive members of Congress will not be re-elected.

Journalists, overwhelmingly liberal, are much more likely to jump on breaking a taboo that fits their thinking – which is that AIPAC twists the democratic process to push the US to be more pro-Israel than it might be otherwise. While there is no problem with breaking taboos, but one must be honest – and very few of the “Is AIPAC too influential” stories in the past month have been accurately pointing out how there are many far more influential lobbies spending far more money than the pro-Israel lobby.

However, there are plenty of taboos around the Israel/Palestinian conflict that are way overdue to be broken:

These are the taboo facts that the media won’t touch. But if the stars can align, they can be broken one by one. The truth is on Israel’s side; it is a shame that too few journalists and politicians are willing to say the simple truth.