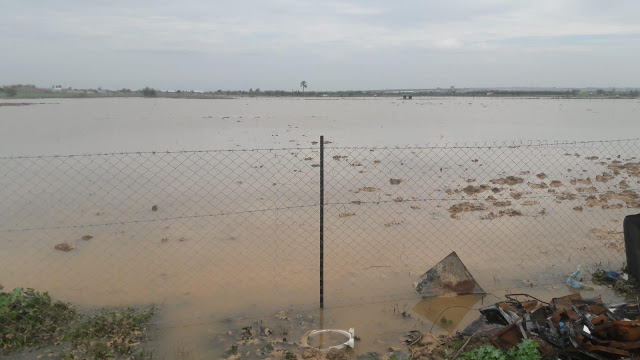 The lie that Israel steals the organs of Palestinians has returned in recent weeks and has been published in a few Arab media outlets, including in English.

And the lie that Israel has dams in the Negev which are opened to flood Gaza has been re-appearing in Muslim media as well. It appears to have started with the Gaza Ministry of Agriculture, run by Hamas, making the false accusation. Anadolu published it, UK Muslim News published it, Kuwait’s news agency published it. And now, it is again the official position of the Palestinian Authority, as its Wafa news agency “reports:”

The occupation forces opened one of the dams of stolen water that reaches the Palestinian underground reservoir in the Gaza Strip, flooding hundreds of acres of land east of the Al-Shujaiya neighborhood, which resulted in severe damage to agricultural crops.

“When the amount of water exceeds the capacity of the dams to seize and transfer it, they are opened, which leads to a rush of water in large quantities that will flood farmers’ crops and inflict heavy damage on them,” Al-Sharif added, referring to the repetition of the process of opening the dams in recent years during winter months.

The accidents caused by the flooding of agricultural lands, as a result of the opening of the Israeli dams, are mostly concentrated in the Gaza Valley and East Shujaiya.

No, there are no dams or floodgates  in the Negev. AFP even debunked this claim five years ago. But Palestinians are so used to blaming Israel for everything that they feel compelled to find a fairy tale that they can tell themselves to explain this disaster as well.

Iran’s PressTV even made a video pushing the flood libel:

Here is the 2015 AFP story that showed that there are no dams in the Negev:

Even when libels against Israel are thoroughly debunked, there is no compunction in anti-Israel media to resurrect the stories. People forget and a new generation of readers eager to lap up the lies is always coming up.

(The funny thing is that Palestinian media eagerly published the story that Israeli fighter jets were damaged in the floods as well. Why didn’t they just build dams?)