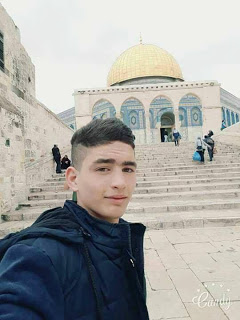 Ahmad Jazal was 17 years old. He had a job as a dental assistant in Nablus.

Instead of going to work, he went to Jerusalem. He took selfies at the Dome of the Rock.

Then he exited the Temple Mount to look for Jews to stab.

He found two religious Jews, taking a walk on the Sabbath, and stabbed them. From video taken right afterwards, you can see he stabbed at least one of them in the back where he bled quite a bit. 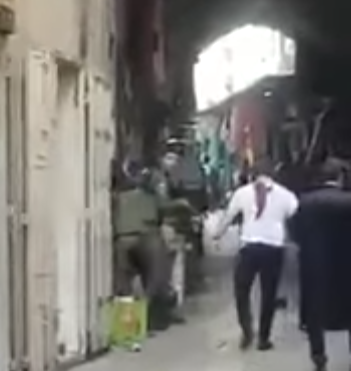 Jazal then fled to a house, seeking shelter. Israeli police found him and shot him to death as he stabbed one of them.
Palestinian supporters claim that there are severe restrictions on Arabs from the West Bank accessing the Al Aqsa Mosque, but apparently this is not true – Jazal easily traveled to Jerusalem.
Although he did not identify with any militant group, he is being praised as a martyr by Hamas and Fatah.

Saying the “occupation” is what prompted Jazal to want to kill Jews is facile and absurd. As a resident of Nablus he would hardly see any Israeli soldiers unless he traveled to other cities and had to go though a checkpoint.

And even if he was angered over the “occupation” that would mean that he would want to target the IDF, not random religious Jews.

No, Ahmad Jazal was taught all his life to hate Jews, and Jews were his enemy, and that Jews had stolen his land. Not Zionists, not Israelis – Jews.

So he devised a plan to kill Jews. He knew all day that is how we was going to likely die – by killing Jews. A religious person, he no doubt was taught that killing Jews would get him to paradise.

This is what incitement does. It doesn’t radicalize every young person who hears it, but it does plant the idea of killing Jews as an obligation on some people – and, crucially, these people do not hear any messages that contradict the ones that make murderers into heroes.

If there is a root cause for these young terrorists, it is the antisemitic incitement that the Palestinian Authority broadcasts and teaches in their schools.

And the world doesn’t want to accept that the Palestinian Authority that they have invested hundreds of millions of dollars in is doing something this despicable.