She resigned over the British government’s stance on the 2014 Gaza war. Now Baroness Warsi is calling for individuals returning to the UK who have fought for the IDF to be prosecuted. The grandson of an Iraqi Jew, Emmanuel Miller, has his say in The Times of Israel:(with thanks: Lily) 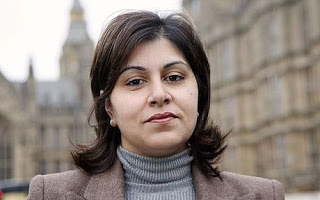 First, a brief explanation of why Israel is, and has always been, a massive part of my life. Although I grew up in London, almost all my extended family live in Israel. My grandfather, a Jewish refugee from Iraq, started the trend in the 50s, and although he left for a number of years, eventually he, my grandmother, and all their children apart from my mother ended up making Israel their home. Yes, I may have grown up in London, but my family is Israeli. More generally, I speak as Jew. Jerusalem is my people’s spiritual home. Jews are indigenous to Israel; the Holy Land is our ancestral home and developments there have always been important to us.