David Lloyd George was the Prime Minister of the United Kingdom from 1916-1922.

This quote from his book “Is It Peace?” written in 1923 is remarkable for how accurate it is today – except that Jews managed to turn Canaan into a land of milk and honey far quicker than he anticipated.

Of all the bigotries that savage the human temper there is none so stupid as the anti-Semitic.

In the sight of these fanatics, Jews of today can do nothing right. If they are rich they are birds of prey. If they are poor they are vermin. If they are in favour of war, that is because they want to exploit the bloody feuds of Gentiles to their own profit. If they are anxious for peace they are either instinctive cowards or traitors. If they give generously-and there are no more liberal givers than the Jews-they are doing it for some selfish purpose of their own. If they don’t give – then what would one expect of a Jew! If labour is oppressed by great capital, the greed of the Jew is held responsible. If labour revolts against capital-as it did in Russia-the Jew is blamed for that also. If he lives in a strange land he must be persecuted and pogrommed out of it. If he wants to go back to his own (land) he must be prevented…

It will be long ere Canaan becomes once more a land flowing with milk and honey. The Jews alone can redeem it from the wilderness and restore its ancient glory.

They belong to a race which for at least 1,900 years has been subjected to persecution, pillage, massacre and the torments of endless derision; a race that has endured persecution which for variety of torture – physical, material and mental – inflicted on its victims, for the virulence and malignity with which it has been sustained, for the length of time it has lasted, and, more than all, for the fortitude and patience with which it has been suffered, is without parallel in the history of any other people.

Is it too much to ask that those among them whose sufferings are the worst shall be able to find refuge in the land their fathers made holy by the splendour of their genius, by the loftiness of their thoughts, by the consecration of their lives and by the inspiration of their message to mankind! 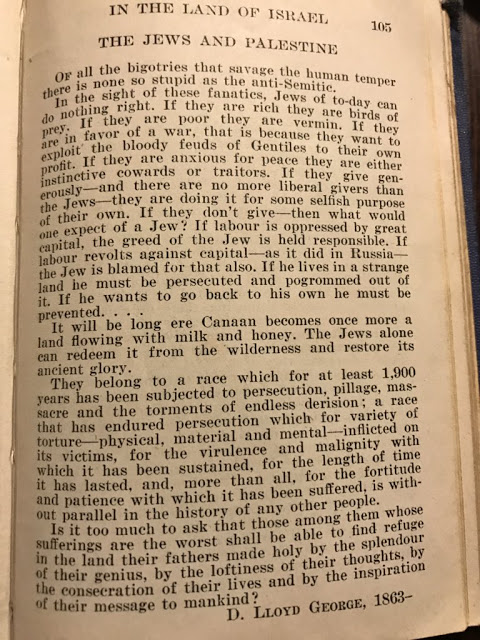