Michelle Goldberg, who most recently defended anti-Zionism and then BDS in “as-a-Jew” op-eds in the New York Times, tackles Rep. Ilhan Omar’s tweets, and she is not happy.

No, Goldberg zeroes in on what she considers to be the real problem with Omar’s tweet – that it empowers Republicans.

Left-wing anti-Semitism is a gift to the right.

Consciously or not, Omar invoked a poisonous anti-Semitic narrative about Jews using their money to manipulate global affairs. …Her words were a gift to Republicans, who seek to divide the Democrats over Israel, even as their president traffics in anti-Semitic imagery and stereotypes. The knives were out for Omar and she ran right into them.

Omar herself has been subject to vicious Islamophobic smears, and has also come under attack for supporting the Boycott, Divestment and Sanctions movement, which seeks to use economic pressure to secure Palestinian rights. Perhaps such criticism is why she’s sometimes seemed unwilling or unable to distinguish between disingenuous political pile-ons and good-faith calls to respect Jewish sensitivities. But whether from carelessness or callousness, her weekend tweets damaged her political allies and squandered some of her own hard-won power.

Goldberg is doing everything she can to minimize Ilhan’s statement.

Worse, she disgustingly provides a link to an anti-Israel organization which came out with a self-serving definition of antisemitism that is mostly centered on Protocols of the Elders of Zion-type Jew-hatred, ignoring of course the antisemitism that is associated with demonizing and wanting the destruction of the Jewish state, or evilly comparing Israel to Nazi Germany and apartheid South Africa. The essay she links to is obsessed with “Ashkenazi dominance” and supposed white Jewish racism towards Mizrahi Jews.

Her link includes this bigoted piece of crap: 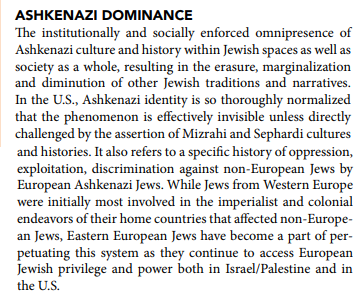 In effect, Goldberg is promoting that kind of antisemitism where “white Jews” are evil colonizers and racists.

Goldberg does refute the idea that AIPAC is influencing Americans to support Israel, noting that much support comes from Americans who she considers to be bigots:


I certainly have no problem with denunciations of Aipac, which plays a malign role in pushing American policy in the Middle East to the right. [AIPAC has been supportive of the two state solution for a long time now and plenty of moderate Democrats support AIPAC. – EoZ]

In truth, while Aipac’s influence is extensive, no one needs to pay off conservatives to make them support Israel. Evangelicals, a far bigger constituency than American Jews, tend to be pro-Israel for religious reasons; some believe that the return of Jews to their biblical homeland is a precondition for the rapture and the Second Coming of Christ. Plenty of others on the right love Israel because it’s a nationalistic, pro-American power in the middle of the Middle East. You can’t blame Jewish money for Kevin McCarthy’s terrible politics.

Not long after Pelosi’s statement, Omar released one of her own, apologizing “unequivocally.” She wrote, “Anti-Semitism is real and I am grateful for Jewish allies and colleagues who are educating me on the painful history of anti-Semitic tropes.” Personally, I’m happy to accept her apology.

Goldberg sickeningly refuses to publish the rest of the text of Omar’s “apology,” where she said “At the same time, I reaffirm the problematic role of lobbyists in our politics, whether it be AIPAC, the NRA or the fossil fuel industry. It’s gone on too long and we must be willing to address it.”

That means her apology about the power of the “Jewish lobby” is anything but unequivocal. And even after Goldberg notes how wrong Omar’s opinion of AIPAC is, she doesn’t have a problem with Omar maintaining that opinion even after her supposed apology.

And later Omar praised another thread where someone claims to have seen a candidate for office jump through hoops to get a $5000 donation from AIPAC. It is a lie – AIPAC does not give money to candidates, since it is not a PAC, and even a $5000 contribution from a pro-Israel donor would be only a tiny amount of the million dollars that candidate raised.

It is obvious that Omar’s apology is not real, but it is good enough for Michelle Goldberg (and many others like Chelsea Clinton), who need any excuse to go back to de facto supporting left-wing antisemites and using antisemitism as just another political weapon rather than attacking it by and of itself. There are antisemitic dog-whistles on both sides and pretending that the ones on your side can be excused with a fake apology is not fighting antisemitism.