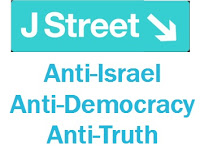 J-Street issued a press release over the Ilhan Omar kerfuffle, and showed itself to be even more hypocritical than we knew. It says that, sure, “elected official” should be careful with their words… but Omar sort of had a point:

Elected officials should be particularly sensitive and careful on the question of the role played by campaign contributions in influencing US policies toward Israel and the Middle East. There is no doubt that money often plays a major role in our political system.

Since the only group Omar specifically mentioned in her offensive tweet was AIPAC, it is obvious that J-Street is agreeing with her that traditional lobbying for Israel is problematic and potentially could cause officials to change their positions to follow the money.

J-Street absurdly styles itself as being “pro-Israel” even though there is very little daylight between its positions and those of the PLO. And the J-StreetPAC page brags that the largest “pro-Israel lobby” in the US is – J-StreetPAC!

Not only that, it brags about its money influencing Congress!


In the 2018 midterm election, J Street successfully worked to shift the balance of power in Washington by electing a diplomacy-first Congress that will act as a check on President Trump’s dangerous agenda and ideology. JStreetPAC shattered its own records in the 2018 cycle, distributing nearly $5 million for 163 congressional candidates, including nearly $2.3 million for House challengers, 30 of whom were victorious. JStreetPAC reaffirmed its status as the nation’s largest pro-Israel PAC, raising over 53 percent of all pro-Israel PAC money distributed this cycle. The success of diplomacy-first candidates in some of the country’s most competitive districts confirmed a major shift in the politics of foreign policy.

So which is it, J-Street? Is money to candidates a good thing or is it evil?

Obviously, their money is kosher. Actual money from Zionists is immoral.

J-Street continues on with its slander:


Elected officials should also refrain from labeling all criticism of Israeli actions or policies as “anti-Semitic,” in a transparent effort to silence legitimate discussion and debate. Such attacks only undermine the vital effort to counter the actual scourge of anti-Semitism in the United States and around the world.

Criticism of Israel is antisemitic when it violates the 3D test that Natan Sharansky posited back in 2004 – when Israel is demonized, delegitimized or subjected to double standards. The test is pretty easy to understand and is the best definition of when criticizing Israel is crossing the line out there.

It is the people who want to violate the 3D test who are the only ones who complain that “all” criticism of Israel is considered antisemitic.

J-Street obviously does not subscribe to the 3D test of what is antisemitic. In fact, J-Street seems to consider no criticism of Israel – or even calls to boycott the Jewish state – to be antisemitic. while I see lots of charges on its site that republicans are antisemitic, I cannot find a single time where J-Street admits that Arabs have said a single antisemitic thing.

This press release where J-Street pretends to be “nuanced” shows, when analyzed, that J-Street’s position towards Israel is indeed perilously close to those of the antisemites who are obsessed with destroying the Jewish state.