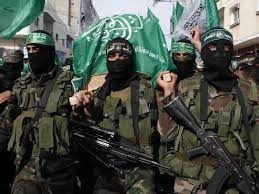 In light of the British declaration that all of Hamas is a terrorist organization, Hamas has been responding with statements that claim that their attacks on Israeli civilians are legal under international law.

Hamas’ press release in response to the news story said, “We believe that resisting the Israeli occupation with all means possible, including armed resistance, is a guaranteed right for peoples under occupation as per international law.”
This was two days before  a Hamas terrorist murdered Eli Kay in Jerusalem, and Hamas’ “political wing” praised the murder. Hamas has consistently claimed that all terrorist acts – suicide bombs, bus bombings, rocket attacks, shootings, stabbings, car rammings – are really acts of legitimate armed struggle.
That claim is made often by apologists for Palestinian terror. One prominent example is CJ Werleman’s  2018 article titled “International law guarantees Palestinians the right to resist,” which is entirely based on this claim:

Stanley Cohen, the convicted criminal who has defended terrorists in court, made a similar argument in Al Jazeera in 2017.
The claim is an absurd lie.
UN General Assembly resolutions do not have the force of international law. These supporters of terrorists murdering Jews cherry pick what they claim supports their position and ignore the overwhelming evidence against it.
Like all good propagandists, they take a germ of truth and then extend it into areas that were never the intent of the language. It is true that under international law, some believe that there is a right for groups under occupation to resist the dominant army under a set of very limited rules that are still evolving.
Even if you consider Israel to be occupying Arab territory, in no way, shape or form does this include terror attacks against civilians, despite historic Arab insistence that clauses be added to UN General Assembly resolutions that appear to grant exceptions for Palestinian attacks. (There are other UNGA resolutions that condemn violence on both sides, proving that even the UNGA is not supportive of Palestinian violence, undercutting even the basic claim of the terror apologists.)
The Fourth Geneva Convention, article 33 is unambiguous: “No protected person [i.e., civilian] may be punished for an offence he or she has not personally committed. Collective penalties and likewise all measures of intimidation or of terrorism are prohibited.” There is no exception to this rule.
The Additional Protocol to the Geneva Conventions, article 51(2), is even more explicit: “The civilian population as such, as well as individual civilians, shall not be the object of attack. Acts or threats of violence the primary purpose of which is to spread terror among the civilian population are prohibited.“
The same article goes on to declare Hamas’ entire conception of “armed resistance” to be illegal:

This makes it clear that Hamas rockets are a direct violation of international law.
(Later in that same article is the prohibition against using human shields.)
These are not the only legal instruments that prove that Hamas-style terror is a direct breach of international law, although they are enough.
UN Security Council  Resolution 1566 (2004) condemns all kinds of terror, and it explicitly says that there is no possible excuse or exception for terrorist attacks – a direct rebuke to those like Hamas, Werleman and Cohen who pretend that Palestinians are in a different category:

1.  Condemns in the strongest terms all acts of terrorism irrespective of their motivation, whenever and by whomsoever committed, as one of the most serious threats to peace and security;
…
3.  Recalls that criminal acts, including against civilians, committed with the intent to cause death or serious bodily injury, or taking of hostages, with the purpose to provoke a state of terror in the general public or in a group of persons or particular persons, intimidate a population or compel a government or an international organization to do or to abstain from doing any act, and all other acts which constitute offences within the scope of and as defined in the international conventions and protocols relating to terrorism, are under no circumstances justifiable by considerations of a political, philosophical, ideological, racial, ethnic, religious or other similar nature, and calls upon all States to prevent such acts and, if not prevented, to ensure that such acts are punished by penalties consistent with their grave nature.

This resolution was passed under Chapter 7, meaning that it has the force of international law.

In 2004, the UN Secretary General described the difficulties in defining terrorism and briefly addressed the arguments of the terror apologists, demolishing them in a single paragraph:

The search for an agreed definition [of terrorism] usually stumbles on two issues. The first is the argument that any definition should include States’ use of armed forces against civilians. We believe that the legal and normative framework against State violations is far stronger than in the case of non-State actors and we do not find this objection to be compelling. The second objection is that peoples under foreign occupation have a right to resistance and a definition of terrorism should not override this right. The right to resistance is contested by some. But it is not the central point: the central point is that there is nothing in the fact of occupation that justifies the targeting and killing of civilians.

Taken as a whole, international law is crystal clear: Hamas and the other Palestinian factions are terror groups and their attacks on civilians are blatantly illegal under international law. They are explicit war crimes.