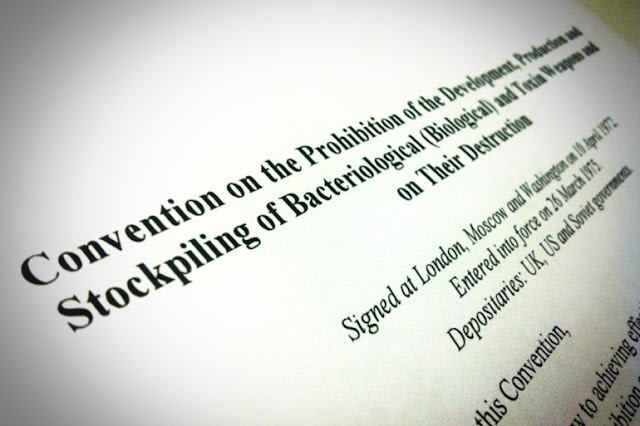 Not to abide by them, of course. As we saw with the Convention on the Elimination of All Forms of Discrimination against Women (CEDAW) and others, the Palestinian Authority signs on all these conventions just so they will look more like a real nation and and can join the International Criminal Court, but there is no or little intent to actually fulfill the obligations in those conventions.

The other major reason the PA joins every UN committee it can find is so that its envoys can make anti-Israel speeches, claiming that Israel is violating whatever the committee or convention is about. It tries to hijack every cause to make wild accusations against Israel.

It happened again this week, at the Conference of the States Parties to the Convention on the Prohibition of Biological Weapons, currently being held in Geneva, Switzerland.

In his speech, he said that the Palestinians cannot fully adhere to the Convention because Israel might have biological weapons manufacturing facilities in Palestinian territory.

Awadallah then tried to stop the Israeli representative from speaking, claiming that Israel has used chemical weapons against Palestinians.

To Palestinians, international fora are places that only exist to harass and threaten Israel. The organizers don’t expect any member to act to subvert the entire process to attack a single state, so there are no means to stop the Palestinians from ruining international meetings.

You can be sure that the other envoys that attend these meetings, people who actually care about non–conventional weapons or climate or women’s rights or anything else, are very unhappy about seeing these meetings turn into showcases of immaturity and stupidity from the Palestinian representatives.