Lately, Palestinian Arabic media have been making a bold claim.

Even before its establishment in Europe, the Zionist movement used to claim that Palestine is the “Promised Land” and that the Jews are “God’s chosen people.” And the heresy of Jerusalem as a “completely Jewish city,”  invaded the Western world, which eventually led the former US President, Donald Trump to recognize Jerusalem as the eternal capital of the Jewish people, and ordered the transfer of Washington’s embassy in the entity to occupied Jerusalem.
In this context, the famous Israeli archaeologist Israel Finkelstein (72 years old) from Tel Aviv University, once again appeared to dismantle these allegations, denying the existence of any connection to the Jews in Jerusalem, as he put it.

Israeli archaeologist Israel Flinckstein said that no one has found any Jewish antiquities in Jerusalem and that the archaeological excavations have not foiund a single Jewish article, and that what was discovered confirms that Jeruaalem is not Jewish and that all Talmudic claims are myths that were marketed for political purposes.
Finkelstein provided important information to the Jerusalem Report about the antiquities discovered in Jerusalem, all of which date back to ancient times, and that they are evidence of important historical periods for the empires that were prevalent, and that the Jews alone are not represented in them. ,
Finkelstein acknowledges that Jerusalem was ruled by the Jebusites, Sassanids, Greeks, Romans, etc., without mentioning the Jews in it, and that archaeology confirms that Jerusalem was never Jewish and was not subject to the rule of the Jews who lived in the vicinity.

Israel Finkelstein is well known as a skeptic of Biblical accounts of history, although he doesn’t define himself in the “minimalist” school of Biblical archaeology. He has said there is no evidence for Joshua’s conquests or for King David being more than a local chieftain.

But did he say Jerusalem has no Jewish history? 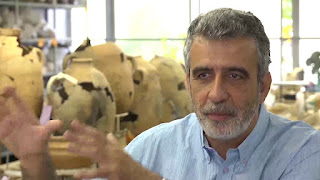 A friend emailed Finkelstein a copy of the Al Quds article and asked him to comment.

Finkelstein’s response: “Complete nonsense. I’ve never said that nor do I think that.”

He added, “The world is out of control, every spin and every lie gets a pass.”

UPDATE: I missed that Finkelstein explained his thinking on Jerusalem in a separate email:

A summary of the history of Jerusalem to the best of my knowledge in a few sentences:

1. The ancient tel was on the Temple Mount. Its size was perhaps about 50 dunams. At that time the city controlled a small area in the southern mountain region.

2. Jerusalem began to spread from the Temple Mount tel toward the Gihon Spring in the 9th century BCE, perhaps in its second half. The city had then grown to an area of ​​about 90 dunams. At the same time, Judah spread to the lowlands and the Be’er Sheva Valley.

3. Jerusalem reached its peak in the second half of the 8th century BCE, in terms of the kings of Judah I would say in the days of Hezekiah. It was then the largest city in all of Israel.

4. Throughout this time until the Babylonian destruction there were palaces and temples on the Temple Mount. Of course this was also the case in the days of the Second Temple.