MAHWAH — Fearing an influx of Orthodox Jews from New York State, the Township of Mahwah introduced two hateful and discriminatory ordinances that illegally targeted that community, the state Attorney General’s office alleged in a stunning complaint filed against the town on Tuesday.

The harsh public rebuke of both the actions of Mahwah’s elected officials and the anti-Semitic sentiment of some residents likened the conduct of the town to the actions of “1950s-era white flight suburbanites who sought to keep African-Americans from moving into their neighborhoods.”

The nine-count complaint, filed in Bergen County Superior Court, seeks a return of more than $3.4 million in state Green Acres grants received by Mahwah and an injunction blocking the two ordinances.

“This is an extensive complaint … but the bottom line is very simple — the township council in Mahwah heard the angry, fear-driven voices of bigotry and acted to appease those voices,” Attorney General Christopher S. Porrino said in a statement.

The first ordinance, which went into effect at the end of July, limited the use of Mahwah’s recreational facilities to New Jersey residents.

The second, which was introduced but not passed, was the expansion of an existing ordinance that banned signs on utility poles, amended to include any “device or other matter.” It effectively would have banned the formation of an Orthodox Jewish religious boundary known as an eruv, which is designated by white piping called “lechis” on utility poles, the state alleged.

“I repeatedly warned the council of these consequences for months,” Mahwah Mayor Bill Laforet said Tuesday.

The religious boundary, which in this case extended from Rockland County, allows Orthodox Jews to do everyday things such as carry house keys or push baby strollers outside of the home on the Jewish Sabbath.

Despite approval from the utility company, the township ordered that the lechis be removed. A group called the Bergen Rockland Eruv Association and residents from Rockland County filed a federal lawsuit in August to allow the lechis to stay.

A ban on an eruv, or threats to have it removed, is “tantamount” to housing discrimination because it could prevent Orthodox Jewish families from living in Mahwah, according to the complaint (which can be read at the end of this story).

Many residents have come out in support of the township’s decision, creating Facebook groups and online petitions.

But the complaint takes Mahwah’s residents to task for their alleged behavior.

The council, the state says, was “influenced largely” by the “vocal anti-Orthodox Jewish sentiment” from some residents on social media and in public meetings.

“I was wondering if there are any thoughts and procedures in place to keep the Hasidic Jewish people from moving into Mahwah?” one resident asked at a June 29 council meeting. “They have chased us out of two towns we lived in and now they are buying up houses in Suffern.”

“I don’t know if you noticed, but the Hasidics have been making themselves very comfortable in our town parks,” said another.

A third suggested people bring their dogs to town parks in an effort to “scare them away.”

Residents also called Mahwah police to report that people who appeared to be Orthodox Jews were using parks, though the callers did not allege that the people were doing anything wrong, the complaint says.

Here are some of the antisemitic comments that residents wrote in an anti-eruv petition:

“This group of people is known for entering a community and taking it over for their own advantage. They are known for taking a lovely community and turning it into a run down, dirty, unwanted place to live.”

“Our town is such a great place and if these things move in they will ruin it.”

“I do not want these things coming into my town and ruining it.”

“They are trying to move into Mahwah once they do our schools will suffer, our taxes will go up. And Mahwah will reach new levels of welfare recipients.”

“They are clearly trying to annex land like they’ve been doing in Occupied Palestine.”

“I don’t want these rude, nasty, dirty people who think they can do what they want in our nice town.”

“I don’t want my town to be gross and infested with these nasty people.”

“They destroy what they have and run things to the ground. Give them one piece of property and before you know it there are thousands of non-tax payers in our great town.”

“This is a soft invasion. Next, we will see homes called ‘places of worship or schools’ for this religious[sic] organization as a way for the members of this religious organization to avoid paying property taxes. I do not want to pick up the tab!”

The law to attempt to ban the eruv is not even the most antisemitic act done here by the township. The ordinance to bar the parks from being used by people who are non-residents of New Jersey was an especially odious way to attempt to keep Jews out of Mahwah even before the eruv would have been built. Mahwah residents complained about Orthodox Jews using their playgrounds: 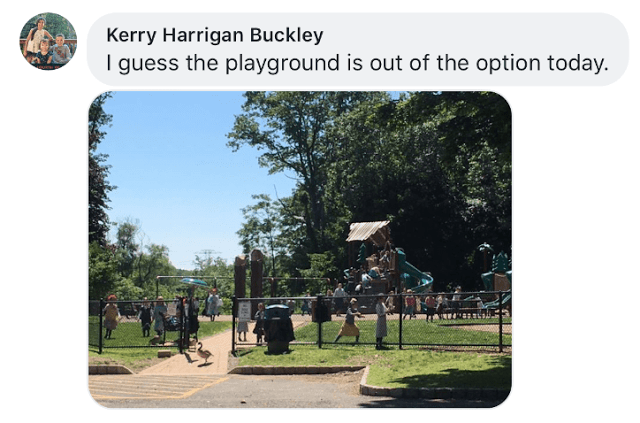 Ironically, these complaints became public during a discussion during a town meeting about swastikas that were found in the town.

But the township enacted the law anyway, changing the text from saying  that the township’s parks could be used by “residents and non-residents alike” to saying that that may be used by “New Jersey residents only,” obviously meant to exclude Jews from neighboring Rockland County in New York.

The chief of police of Mahwah said that this law was unenforceable. What he was being asked to do was itself against the law – because  residents wanted police to stop and ask for ID only those people in the parks who do not look like they belong – meaning, only Orthodox Jews.

The Town Council then moved to remove the chief of police for refusing to enforce this discriminatory law!

He wrote to the Bergen County Prosecutor’s office asking for advice, and the prosecutor specifically told the chief of police not to enforce this ordinance because it is patently illegal to ask for IDs from people based on their appearance. 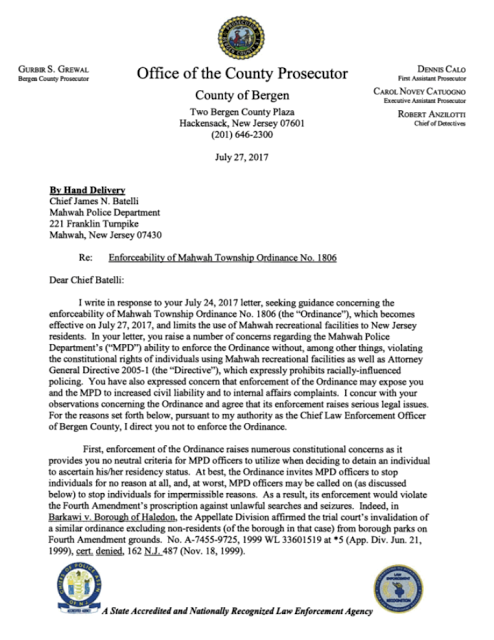 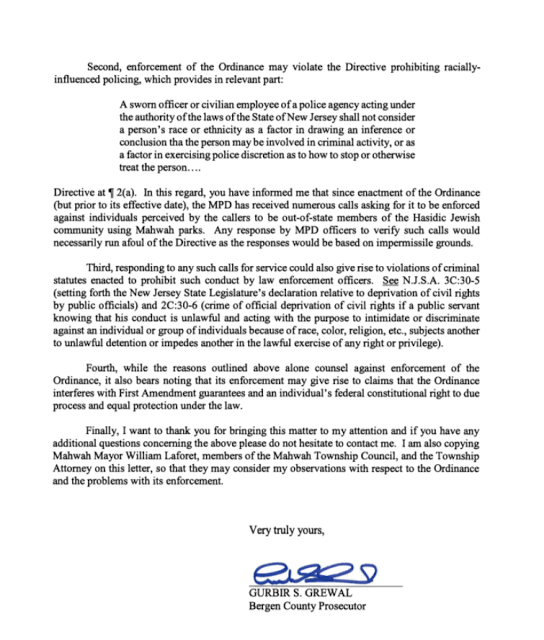 Residents are telling reporters that, of course they aren’t antisemitic. But the sequence of events shows that this is pure, modern manifestation of treating Jews (in this case, religious Jews) as vermin.