Fatah has a video of an anti-Israel protest in New York City, seemingly on Saturday, where they claim 2000 people showed up marching towards the Israeli consultate. (I could find no record of any protest on Saturday, so it is possible that Fatah is recycling an old protest to make it sound like there is worldwide support for abolishing security measures, but who knows?)

I noted one sign that was from the marginal, purportedly ultra-Orthodox Neturei Karta group (NKUSA) – but the person we could see in the video holding the sign was clearly not a member of Neturei Karta, whose members dress all in black as if they were normative ultra-Orthodox Jews. 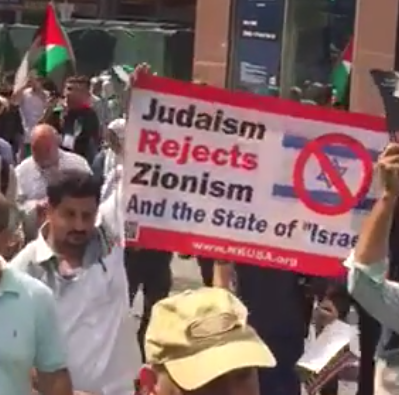 Apparently, Neturei Karta hires some non-Jews to protest for them, presumably for the Sabbath.

It should be re-emphasized that every other ultra-Orthodox group has condemned Neturei Karta, even other anti-Zionist sects.