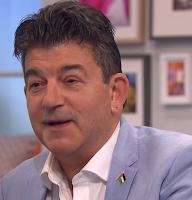 I have no idea why John Clarkson Stewart chose the stage name John Altman.

“John Altman” sounds more than a tad Jewish. But Jewish the British actor ain’t,  as the cross he wears around his neck in this video from 2015  in close proximity to the Palestine Solidarity Badge that seems to be a ubiquitous part of his couture would seem to indicate.

(Remember the kerfuffle over his sporting of that PSC badge on the ITV show Loose Women a couple of years ago?  “Aussie Dave” of Israelly Cool blogged about it here)

In that video from 2015 Jenny Tonge standing on Mr Altman’s right, for this is a Kingston and Richmond PSC event, and Richmond’s Jenny’s local branch.

Anyway, defaming Israel’s conduct in defending itself from terror and aggression has become an annual high summer occasion for the well-heeled PSC types of Surrey, and Mr Altman seems to be something of a fixture on these occasions.

In the 2015 video to which I’ve linked above Mr Altman pledges to do all in his power as an actor to push the Palestinian cause: “It’s all they want … to have their own land and live in peace …”  he declares, as if the fiendish aims of Hamas and Hezbollah did not exist.

“What the Israelis do to the people of Gaza Hitler did to the Jews”, he thunders.

“America and every powerful nation should tell the Israelis to stop. Cut them off from the national [sic; international?] community.  They wonder why they’re hated …”

As this video by anti-Israel activist Seymour Alexander shows, Mr Altman was on hand a few days ago to give moral support to  those posh folk from the Richmond and Kingston PSC.  The video consists of a litany of names of Palestinian children allegedly killed by Israel.  To quote the uploader:


PSC Richmond &Kingston’s annual commemorative name-reading event for the 551 slaughtered Palestinian children during the IDF’s ‘Protective Edge’ assault on Gaza in July/August 2014. This year unhappily there is a whole new batch of names to be added containing the names of children killed by Israeli sniper fire during the ‘Great March of Return’ demonstrations in Gaza (2018).

It’s likely that Mr Altman’s a good-natured soul who’s been taken in by the incessant propaganda spewed out by much of the leftist media, including the egregiously dishonest reportage by many of the correspondents employed by the BBC.  Al Beeb, of course, was only too ready to proclaim the supposed casualty figures at the time of Operation Protective Edge.  So it is not surprising that the naive and the gullible were taken in by them.

But as we read, regarding the earlier (2008-9) Operation Cast Lead, here (where links to the statements are given):


‘Every war has civilian casualties. It is one of the tragic elements of violent conflict. Sadly, the war in Gaza was no different and innocent lives were lost and should be mourned. It is still necessary, however, to separate fact from fiction about the casualties of war and ensure that scurrilous accusations about the behavior of the Israeli Defense Forces do not go unchallenged.

History has shown that Israeli soldiers are routinely smeared by officials from human rights organizations, the UN and propagandists in the Arab world and beyond. To cite just a few examples, in the first Lebanon war, Israel was accused of killing 10,000 Lebanese and leaving 600,000 homeless. Later, it was learned the figures were inventions of Yasser Arafat’s brother, Fathi, who headed the Palestine Red Crescent. In 2002, Israel was charged with killing 500 people in the Jenin “massacre.” It was a lie. A total of 56 people died, 34 were terrorists. In the second Lebanon war, the Lebanese Prime Minister claimed another “massacre,” but instead of 40 dead as he claimed, only one person had died.

In Gaza, we are told that 1,300 Palestinians died, most civilians. What is the source for these statistics?

The principal source appears to be Palestinian health officials who are all employed by Hamas. Given that Hamas killed Palestinians who crossed the organization during the fighting and have been exacting more revenge since the cease-fire, how likely is it that any of these officials will provide accurate information? Since it is in the interest of Hamas to minimize the number of casualties among its troops and maximize the number of civilians, is it surprising that Palestinians claim fewer than 100 terrorists were killed?

Usually journalists seek two sources to verify information, but in this case, most were satisfied with one that was unreliable and likely biased. At the least, the media could have presented the figures as unverifiable claims.

What about the UN sources? They have their own bias from years of working for the benefit of the Palestinians, cooperating with Hamas and apologizing for terror against Jews. Moreover, since UN officials were unlikely to have gone around Gaza counting bodies, they likely relied on the same tainted Palestinian sources.

Meanwhile, how do we know how many of the casualties were terrorists and how many were not? We know that Hamas ordered the fighters to take off their uniforms and try to blend in with the civilian population. We know they hid in private homes. If a dead man is found, is it clear that he is not a terrorist? What incentive do Palestinian officials have for reporting that he is?

What about women and children? Obviously, they were innocent victims. Unfortunately, because of Hamas’s cynical use of women and children as rocket crews, ammunition carriers and human bombs, even small numbers of these normally innocent groups of people may very well have been combatants.

It is also not clear how civilians died. According to the Palestinians, Israel murdered them all. But how many died from Hamas rockets that fell short? We know of at least two Palestinian children killed that way. How many died when booby-traps set for Israeli troops went off in rooms full of Palestinians trapped there by Hamas? How many were killed by secondary explosions when arms caches hit by Israeli forces exploded? How many died because they were in the vicinity of rocket crews that drew Israeli fire? The truth is the people reporting casualty figures have made no effort to determine the cause of death because that would limit the propaganda value of the dead.

A deeper philosophical question is whether Palestinians who did nothing to prevent the Hamas attacks are “innocent.”

According to the IDF, 700 of the dead were terrorists, mostly from Hamas, and 250 were civilians. Another 200 people are still unaccounted for. If these figures are accurate, then the majority of the casualties were indeed terrorists. Israel, of course, has its own bias, but it also has a record of integrity and, unlike the Palestinian Authority, is an open democracy that allows its claims to be checked independently.

Every individual should be mourned whatever the true number of casualties. So long as Hamas uses its children as shields, as rocket crews and as suicide bombers, however, Israel can do nothing to achieve peace with the Palestinians.’