The re-dedication of the Eliyahu Hanavi synagogue in Alexandria was attended by almost two hundred Jews, mostly Egyptian-born or their descendants. Michelle Baruch wrote up her impressions of her trip for the Jerusalem Post. One of the highlights was her visit to the Jewish cemeteries. (With thanks: Vivi) 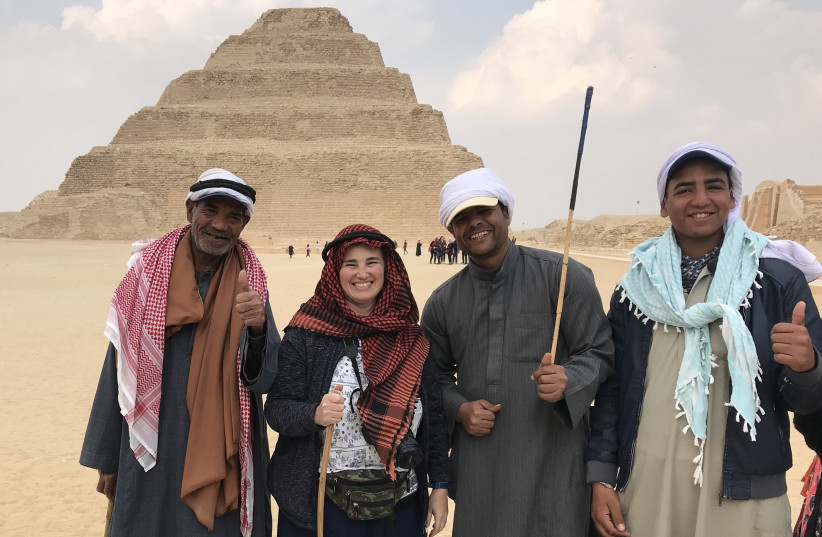 Michelle Baruch at the pyramids of Saqqara (Photo: David Flatioff)

The most moving day of our eight-day trip to Egypt was Friday, February 14, the visit to the two Jewish cemeteries of Alexandria, which are known as Chatby and Mazarita, and the rededication of the Nebi Daniel synagogue. On that Friday morning, buses and minivans shuttled all the visiting delegations to the two main Jewish cemeteries of Alexandria. An Arab family that lives in the Chatby cemetery, along with a team of other people, had worked relentlessly cleaning up the cemetery over the couple of weeks prior to our visit. Some 40 tons of garbage were removed from both of the Jewish cemeteries in Alexandria. This was also made possible by donations and financial assistance totaling $30,000 by members of the Egyptian Jewish community worldwide.

After the rubbish was cleared, the extent of the damage became apparent. Many graves are no longer recognizable; either they were smashed or marble was stolen so there are no names on the graves. Fortunately, Al Zahraa Adel Awed, a kind Egyptian tour guide, had volunteered to search the Alexandria Jewish cemeteries for the names that people emailed in before the delegations arrived. Al Zahraa, can be contacted through her email: tourguide_egypt@yahoo.com.

She managed to locate one of my relatives, my mother’s father, Isaac Acker, who had passed away when my mom was only 15. It was moving for my mother, now 75, to find her father’s grave and light a candle and say kaddish there for him. More than 60 years had passed by without her having this opportunity.

The following week we had a short visit to the Bassatine, the Jewish cemetery of Cairo, which is in even worse condition than Alexandria’s. Apparently the cemetery was being used as a garbage dump, and it took several hundred garbage trucks to clear out all the rubbish that had accumulated there over the last few decades. The Bassatine Cemetery is the second oldest Jewish cemetery in the world, after the Mount of Olives. Only 1,200 graves remain there with partial names, which is only 25% of the original amount. Several years ago, the cemetery was mapped and names can be searched online at: http://bassatine.net/bassamap.php. Additional info can also be obtained by emailing: jcccairo@gmail.com.