With all the other news, this AP story from March 3 didn’t receive enough attention: 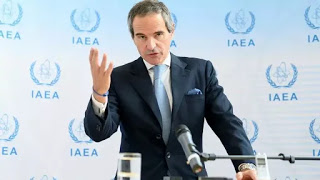 The head of the UN’s atomic watchdog on Tuesday sounded the alarm at Iran’s cooperation with the agency and demanded “clarifications” over an undeclared site in Tehran where uranium particles were found late last year.

It comes on the same day as the IAEA issued two reports, one on Iran’s current nuclear programme and the other detailing its denial of access to two sites the agency wanted to visit.

The IAEA has for months been pressing Tehran for information about the kind of activities being carried out at the undeclared site where the uranium particles were found.

While the IAEA has not identified the site in question, diplomatic sources told AFP the agency asked Iran about a site in the Turquzabad district of Tehran, where Israel has alleged secret atomic activity in the past.

In addition, according to a report issued by the IAEA on Tuesday, “the Agency identified a number of questions related to possible undeclared nuclear material and nuclear-related activities at three locations in Iran”.

At one of them the report said the IAEA had from early July 2019 observed “activities… consistent with effort to sanitize part of the location”.

A diplomatic source said that the three locations were separate to Turquzabad.

The source also said that the agency’s queries were thought to relate to Iran’s historic nuclear activities and not to its compliance with the 2015 nuclear deal with world powers.

The IAEA report says the agency first raised questions about the sites last year and that Iran refused access to two of them that the agency wished to visit in late January.

The second report from the agency detailed Iran’s current breaches of several parts of a landmark 2015 international deal on scaling back its nuclear programme.

The report showed Iran’s stockpile of enriched uranium now stands at more than five times the limit fixed under the accord.

It said that as of February 19, 2020 the Iranian stockpile stood at the equivalent of 1,510 kilogrammes, as opposed to the 300 kg limit set under the agreement.

Some experts consider this amount to provide sufficient material to produce a nuclear weapon, depending on its exact level of purity.

However, it would still need several more steps, including further enrichment, to make it suitable for use in a weapon.

Isn’t it funny that the people who are using the coronavirus as a means to pressure the West to lift sanctions don’t mention this?