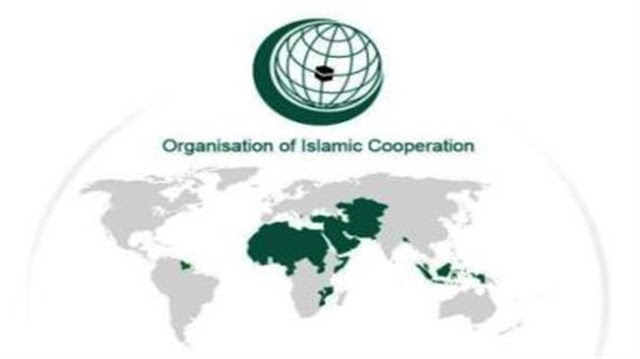 The Organization of Islamic Cooperation (OIC) issued this statement this week:


Muslims are marking the 48th anniversary of the sad burning of the holy mosque of Al-Aqsa, the first Qibla (prayer direction) of Muslims and the third holiest site in Islam, amid mounting extremist settles’ violations and assault, condoned by the Israeli occupation forces, against the Al-Aqsa.

Muslim media is claiming, as usual, that Israeli “occupation forces” were responsible for the fire set by a deranged Christian.


The policy of judaization and ethnic cleansing practiced by the Israeli occupying power in the city of Al-Quds, against its population and sanctities, is such that it constitutes a breach of the Muslim Ummah’s indelible religious rights and heritage. More than a source of provocation to the feelings of Muslims, an offense to the freedom of worship and a desecration of the sacred places of Islam, these policies and practices are a downright affront to the international law and the relevant international legitimacy resolutions.

Isn’t it cute when Muslims invoke international law to protect freedom of worship that they deny everyone else who doesn’t submit as second-class citizens?

The OIC’s respect for other religions is so huge that they cannot bring themselves to capitalize “judaization.”


On this sad occasion, the Organization of Islamic Cooperation reaffirms the central religious and spiritual character of Al-Quds and the place of importance the holy Mosque of Al-Aqsa holds amongst the Muslim community worldwide, stressing that the integrity and sanctity of this city’s holy places can only be maintained if peace and security are established throughout the entire region.

It’s equally cute when people who support terrorism against Jews and infidels talk about their vision of peace throughout the region.

The Fourth Geneva Conventions are very clear that the “occupying power” can do essentially anything necessary to ensure security. Security concerns are of paramount concern. Read them.


… The OIC also calls for a cessation of the ongoing Israeli violations and judaization plans, especially Israel’s attempts to harm the Islamic and Christian holy places in Al-Quds, on top of which is the holy Al-Aqsa Mosque.

And by “harm” they mean “allowing Jews to quietly and respectfully visit.”

This statement shows how Muslims have adopted the language of human rights to urge the exact opposite. But most Western observers are too frightened to point this out since, if you accuse Muslim leaders of being anything less than liberal, they might threaten to kill you.