TOP NEWS
http://jewishrefugees.blogspot.com/2017/08/egypt-seizes-jewish-itens-from-saudi.html
Controversy centres over a haul of ‘Jewish antiquities’ seized by the Egyptian authorities from a Saudi ‘smuggler’. At least one item appears to be a modern forgery. Report in the Times of Israel (with thanks: Boruch):

A collection of 18th century Jewish items was seized from archaeology smugglers by Egyptian authorities late last week in a joint operation between the Hurghada Ports Authority and the Egyptian Ports Antiquities Unit of the Ministry of Antiquities. 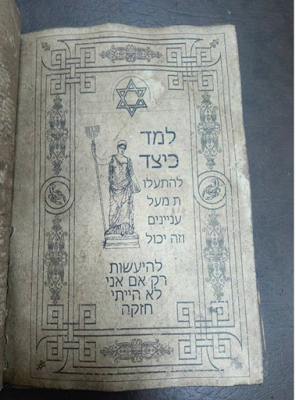 This ‘find’ has aroused suspicion: it uses a modern typeface and its sentences make no sense.

The smugglers attempted to move six Jewish artifacts via the Red Sea resort city of Hurghada. According to a report in AhramOnline, Ahmed Al-Rawi, head of the Central Administration of Seized Antiquities Unit at the antiquities ministry, said the seized loot was discovered in the possession of a Saudi citizen. Al-Rawi said the finds were authenticated in accordance with law 117/1983.

Included in the trove was a cane with a handle carved in stone which depicts a bearded man wearing a yarmulke.
Additionally, five stone reliefs engraved with texts written in Hebrew and other Jewish decorative elements were discovered, according to a Facebook post from the Egyptian Ministry of Antiquities.
An additional find in the seized collection was a 29-page Hebrew book described by the Egyptians as “the commandments of Judas Iscariot,” one of the 12 disciples of Jesus. This item was not dated to the 18th century and its typeface points to a much more modern provenance.
Read article in full