TOP NEWS
http://jewishrefugees.blogspot.com/2020/09/mukhtar-forced-silwan-yemenites-to-buy.html
The blogosphere has been buzzing with reaction to a BBC Arabic programme   – some have called it a hit piece – politicising the funding of Elad, the organisation responsible for developing the archaeological site of ‘Ir David’, the city of Jerusalem in King David’s time. ‘Ir David’ has been built over by  the ‘Palestinian’ village of Silwan. Accusing Elad of evicting Palestinians from their homes, the BBC paints a partial picture  of ‘Jewish settlers stealing Palestinian land and  property’.  The reverse is true.  This blog has documented the fact, conveniently omitted by the BBC, that  Silwan
( formerly Kfar Shiloah) once had a population, at its height,  of 200 Yemenite Jewish families, but these were forced out by Arab violence in the 1930s. David Collier uncovers some surprising nuggets: 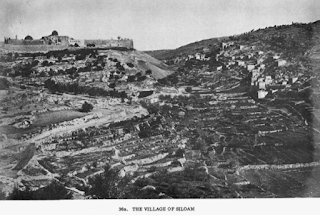 This photo from 1865 shows that the area now known as Silwan was mainly empty space.

Not long ago, the ‘Arab village of Silwan’ was a tiny settlement on the eastern ridge of a hill on the outskirts of the old city of Jerusalem. Building on the western ridge – in the ‘City of David’ began in the 1880s when Jews began buying land there. This image, showing all the empty space is from 1865: A new village, Kfar Hashiloach to purchase more land – by the then head of the Arab village of Silwan. Don’t be so surprised – Jews were already paying the village protection money so that their burial sites would not be vandalised.

In pre-Israel days, Jewish protection was often provided by local Arabs ‘at a cost’. Much of the land purchased by Jews was stolen when Jews were forced out in the 1930s due to ongoing Arab violence. Arab families simply moved in to the vacated Jewish property.
Obviously between 1949 and 1967, when Jordan had control, the Jewish presence was obliterated completely. When Israel recaptured the land in 1967 it came complete with a new population.When Jews began to repopulate some of their old property – such as a local synagogue – they had rocks thrown at them by local residents.
Read post in full
More about Silwan (Kfar Shiloah)
Central Zionist Archives