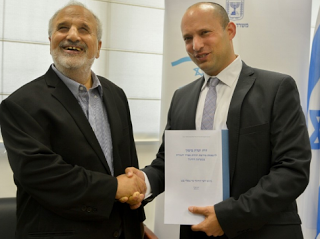 In  commissioning the Biton Report, was education minister Naftali Bennett making a play for the Mizrahi electorate – slightly less cynical than using a sports star ? (Or was it the result of

years of lobbying by organisations representing Jews from Arab countries?). Either way, Arye Tepper, writing in The Tower sees the promotion of Mizrahi heritage as a means to unite religious and secular Jews in Israel.

The inexplicable manner in which the heritage of Mizrahim—Jews from Arab and Islamic lands—is elided in Israeli schools was recently put on display with the release of the 360-page Biton Committee Report. Formed in March 2016 at the behest of Education Minister Naftali Bennett, and led by the critically-acclaimed Algerian-born Israeli poet Erez Biton, the committee assessed the manner in which Mizrahi heritage is taught (or isn’t taught) in the Israeli educational system.

The Biton Committee divided its work into nine subcommittees. The subcommittees were manned by 80 academics and experts who met weekly or biweekly in order to address different aspects of the Mizrahi story. Aside from a brief introductory synopsis, the report is, essentially, a summary of the work done by the different subcommittees. Unsurprisingly, the report calls for increasing the amount of Mizrahi history taught in grades 1-12. With regard to literature, the report notes, “At present a high school student studying in the state school system can complete his or her study…without having been exposed to the Mizrahi voice except for the poets of the Golden Age of Spain.” This, too, is supposed to change.

Specifically, the report recommends studying “the young generation of (Israeli) poets and musicians that has exploded on to the Israeli scene,” with an eye toward the working-class, southern development towns where many of these artists grew up and Mizrahi Jews were originally settled by the government. “This is another important perspective for studying the Land of Israel.” The committee also recommends utilizing the period around November 30th, designated Mizrahi Heritage Day by the Knesset in 2014 in order to commemorate the flight of Jews from Arab and Islamic lands, for teaching students about Mizrahi history and culture.