I recently returned from a short vacation in Israel. Visiting Israel should be a requirement for anyone actively engaged in the fight against antisemitism. It works like receiving an antidote. Nothing places the IHRA definition of antisemitism into perspective better than witnessing first-hand the enormous gulf between the democratic reality on Israel’s streets and the non-existent demon-state that is described in anti-Israel Facebook groups. It leaves with you a lasting clarity over the absurdity of the anti-Israel arguments.

Last week Israeli state TV ran a documentary on BDS (in Hebrew). I had given them access to my archives and was interviewed by them for the show. The team who made the documentary had met with Miko Peled in Israel.  It is worth viewing this short segment to see how nasty Peled is in real life:

Most people know Peled’s backstory and I have no interest in repeating what others have written before. I was in the room when he spoke about giving Holocaust denial a platform. What always interests me is the support network. Miko Peled is an angry outcast, that nobody should have heard of. Instead he is given top billing at BDS events internationally. We know anti-Zionist Jews are a fringe group, so the question can be asked – just who is in the audience?

As my research into the Scottish Palestine Solidarity Campaign showed, when Jewish people stand up to claim there is no problem with antisemitism, half of the people in the room applauding are hard-core antisemites themselves (see case study on Jackie Walker event p91-110).

I argue that without this support network of antisemites, these fringe anti-Zionist Jews would not have an audience. By placing greater import on the antisemites than the few useful puppets they hide behind I also suggest that this is a more accurate way of looking at the problem. So when Miko Peled responded to my tweet of the video above, my natural instinct was to look at those people who were applauding him.

*It has to be said, that nobody is responsible for those that like, comment or share things they have written*. But that isn’t the point. I am not interested in individuals. Miko Peled is not responsible if one, two or five antisemites are in the audience, but when that level reaches 50% doesn’t it demand that we ask questions? Given the high levels of antisemitic thought present in his audience why is Miko Peled denying their existence?

Of the fifty-one identifiable accounts that retweeted Peled, eight were discounted for reasons such as language / translation, which left a sample size of forty-three to be analysed. The results were as anticipated, Miko Peled is not being shared around or publicly supported by peaceful people who want a just solution to the conflict.

Twelve of the accounts were less than one year old (28%). Five post more than a hundred tweets a day (12%), with two accounts reaching staggering levels (10,000 tweets a month). Fourteen have less than a hundred followers (33%) and twenty less than two hundred (47%). These are standard returns for trolls and sock accounts. Yet it was the levels of antisemitic content that really caught my eye. Twenty-two of the accounts distribute hard-core antisemitism material (51%). Remember – Peled is active and popular because he enables a denial of antisemitism, yet at least half of those giving him a platform are antisemites.  – it is that link that makes the findings so sinister.

All of these tweets came from people who retweeted that single Miko Peled response. 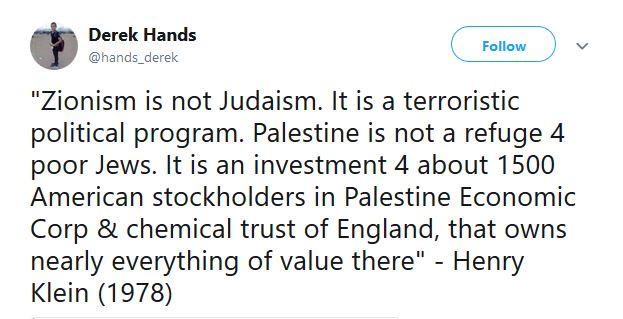 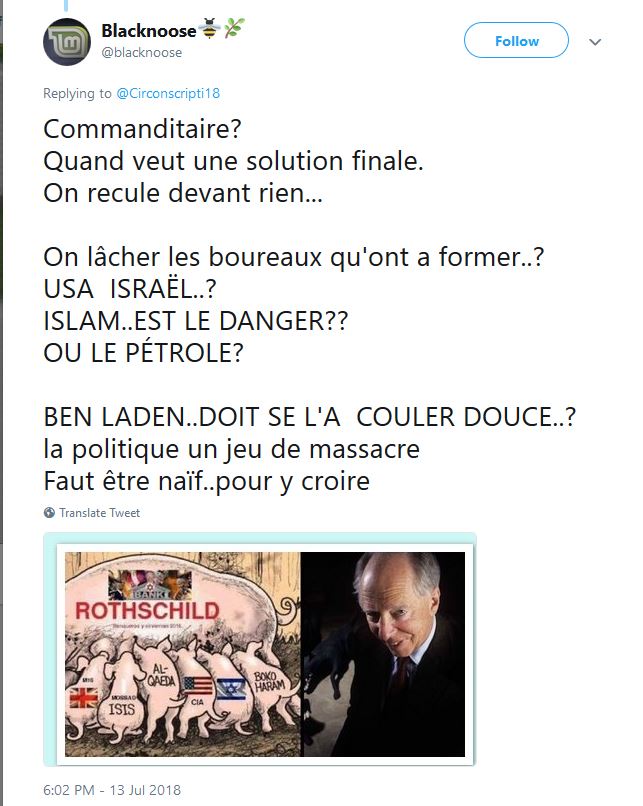 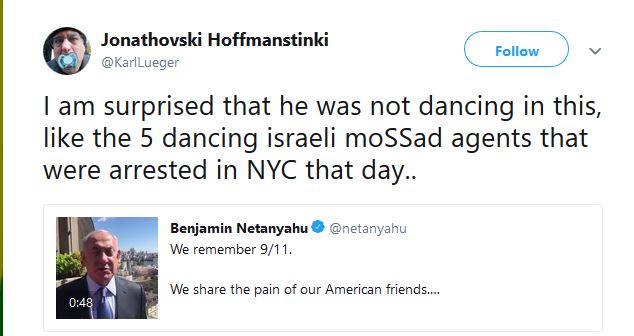 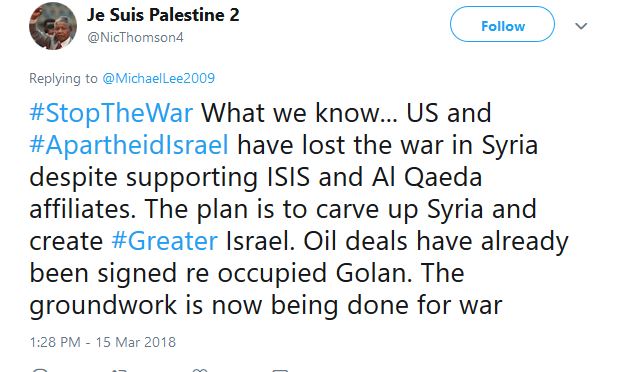 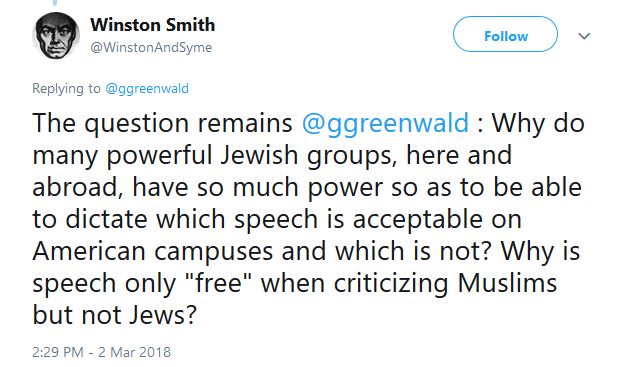 It is fairly certain some were missed and 51% is therefore a low estimate. In any event over half of the accounts that chose to retweet Miko Peled’s response have shared or promoted hard-core antisemitic propaganda.

To test if these high levels continued across platforms, I chose a recent Facebook post of Miko Peled’s and looked at the accounts who had supported him there. Facebook provides a different challenge because privacy issues restrict access to some of the accounts. All of these posts came from accounts who had liked the Miko Peled post. We start with someone who shares posts from Renegade Tribune ‘an anti-Semitic, Holocaust denying, neo-Nazi’ website: 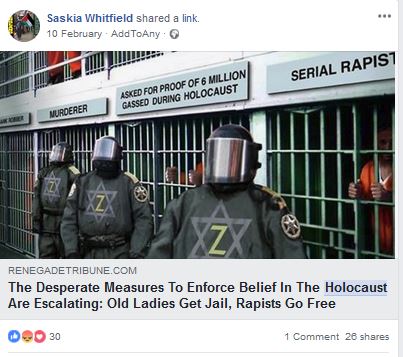 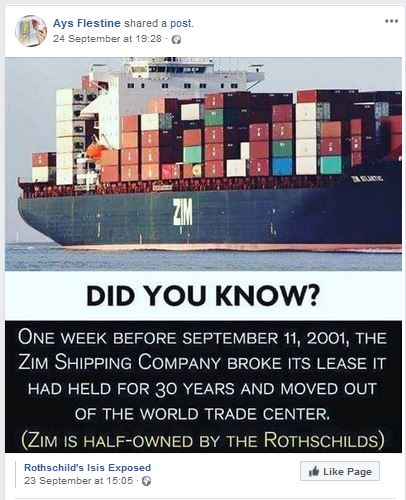 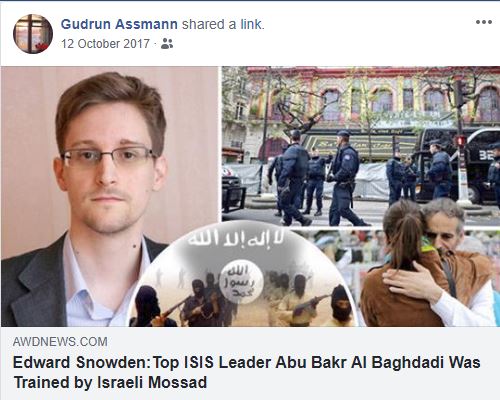 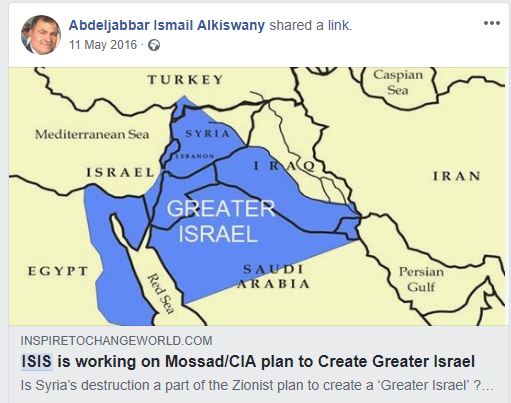 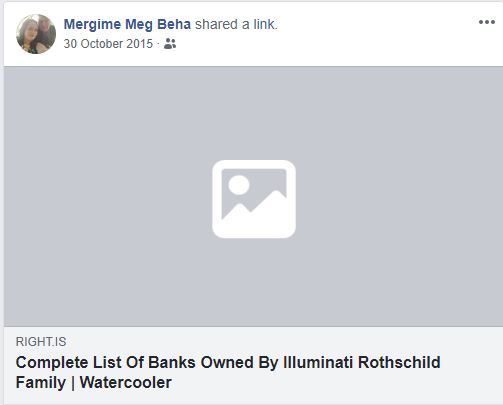 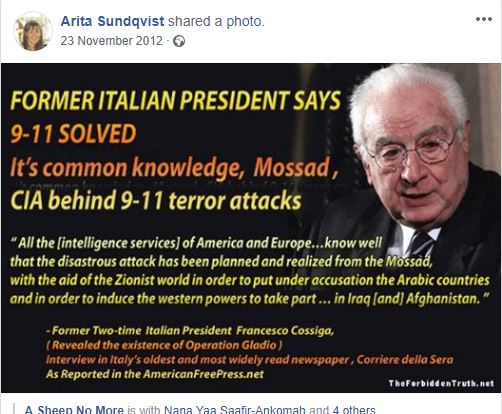 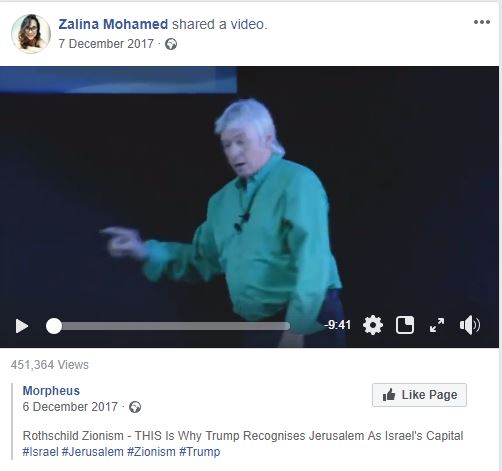 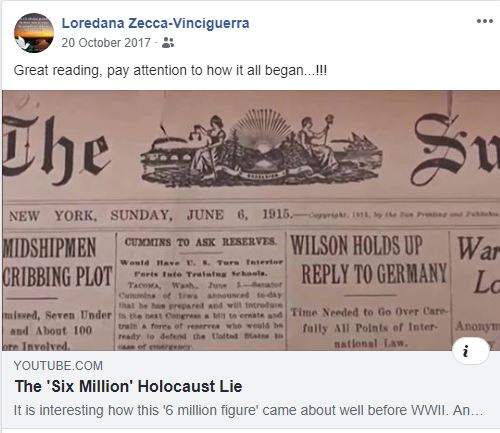 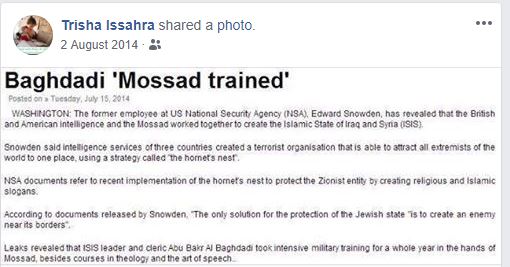 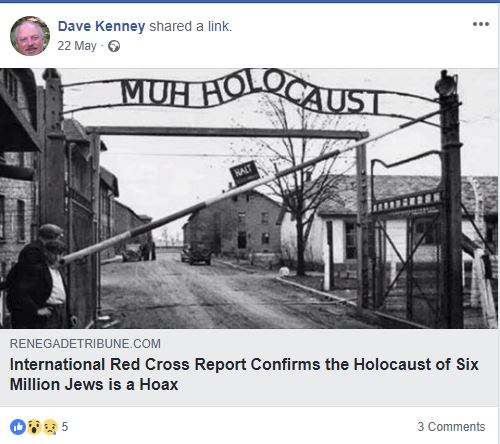 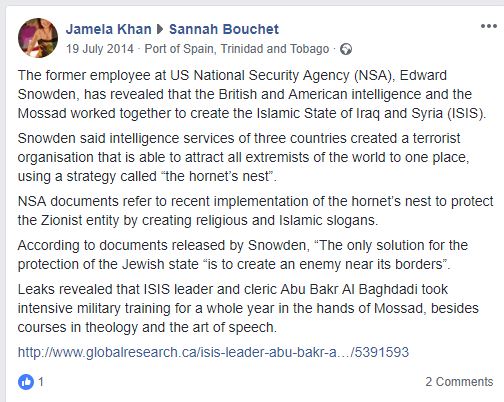 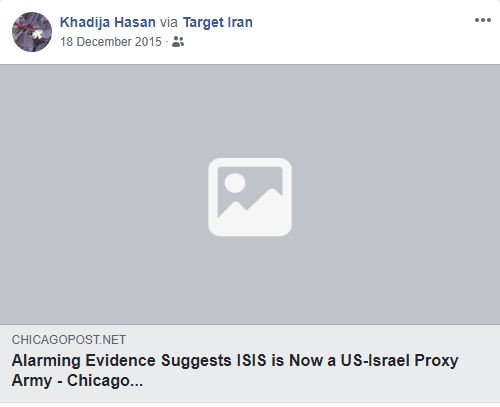 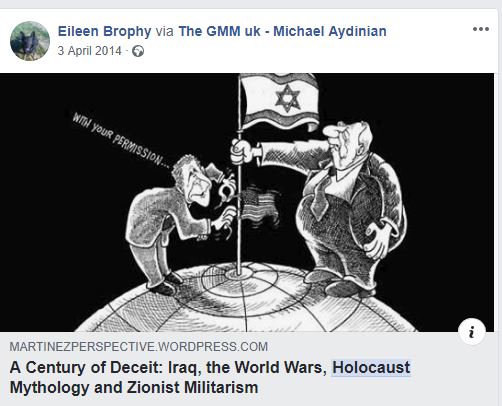 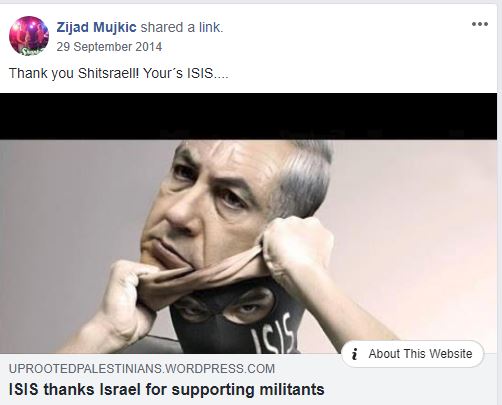 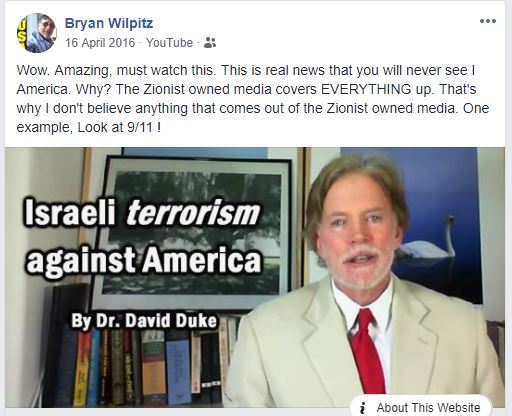 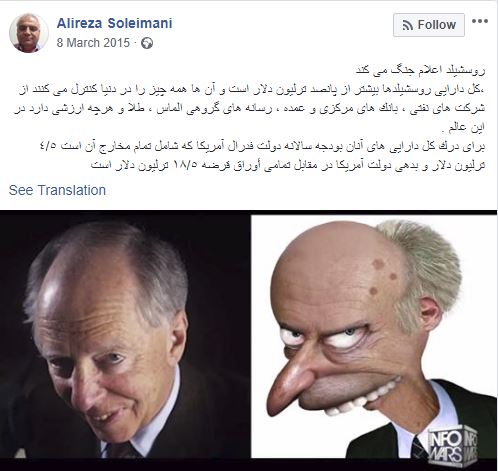 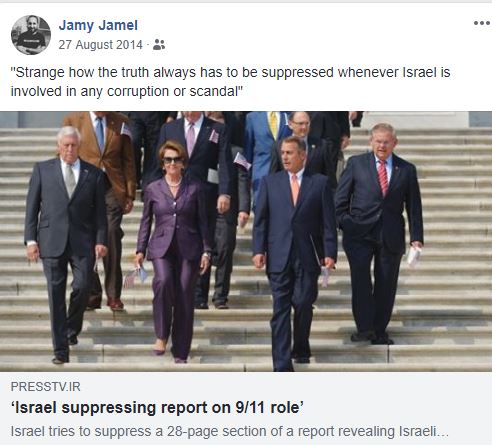 And we may as well finish as we began, with the Renegade Tribune: 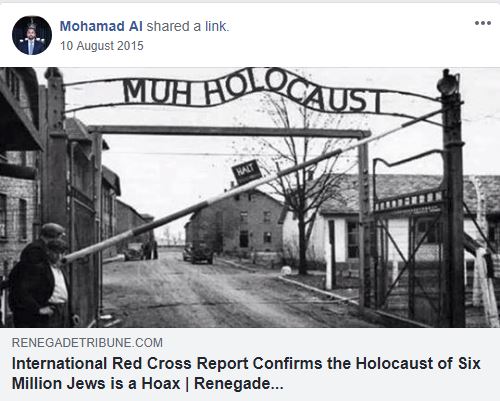 Out of thirty-four accessible accounts, twenty-one (62%) returned hard-core antisemitic results. 21% had Holocaust denial on their timelines. All of these people supported that one Miko Peled post.

This is currently an area I am investigating. What are the levels of antisemitism in the crowd that provide anti-Zionist Jews with a platform? I don’t care that Miko Peled is a thug. What does bother me is that many of those people sharing his angry words are hard-core antisemites. Take these people away and those people like Miko Peled no longer have an audience. Since I began quantifying levels of antisemitism within anti-Zionist activity, the results have always been higher than 40%. Where Jewish anti-Zionists provide cover that level seems to reach staggering levels.

Regardless of how much he may protest, Miko Peled seems to be surrounded by antisemites. Miko Peled is also clearly a man who likes to play to his audience. Perhaps he is not so much the General’s son as the General’s shame.

This blog is unique, and the type of investigative journalism this work requires is intense. Rising antisemitism must be researched and challenged. We have to shine a light into the shadows and show people what is happening.

I was recently named as one of the J100 (‘top 100 people positively influencing Jewish life’) by The Algemeiner. My work is fully independent, and your support makes much of what I do possible. This research can and does make a difference.

If you can, please consider making a donation. Either a single amount or a small monthly contribution.

Keep up to date, subscribe to the blog by using the link on the page.

The post Miko Peled, playing to the antisemitic crowd that adores him appeared first on Beyond the great divide.