An international fashion designer and an ambassador are members of the prominent Nonoo family of Bahrain. As Israel and Bahrain sign their historic peace agreement,  Jewish Insider profiles the Nonoos. 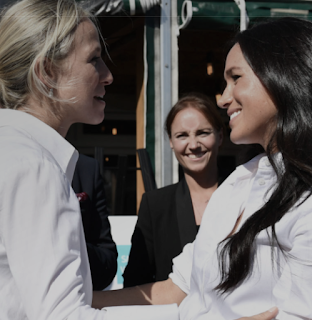 Misha Nonoo (left) with Meghan Markle. Misha is said to have introduced Meghan to Prince Harry

Do you know the Nonoos? The recent normalization deal between Israel and the tiny Gulf nation of Bahrain has put a spotlight on its even tinier Jewish community. And among its most prominent members is the Nonoo family, the Jewish tribe that traces its roots to Iraq and has reached the top echelons of both government and high society.
Bahrain’s Jewish population is estimated to be around 30 members — but they’re not all Nonoos, Ebrahim Dahood Nonoo, the head of the country’s Jewish community, told Jewish Insider in a recent phone interview from Manama. “We do have some Cohens and we do have some Roubens and we do have some Khedouris.”
Nonoo himself made history in 2001, when he was appointed as the first ever Jewish member of Bahrain’s parliamentary Shura Council. He was succeeded by his cousin, Houda Nonoo, in what has since become a permanent seat reserved for the Jewish community — now occupied by Nancy Khedouri. And Houda Nonoo made headlines around the globe when she was selected in 2008 to serve as the Bahraini ambassador to the United States — the first ever Jewish ambassador from any Arab country.
“That was the most fabulous, fabulous event really, we were so thankful to the king for that,” Ebrahim told JI of Houda’s appointment as ambassador. “Our present king, he takes decisions that are really very, very good decisions even though they might surprise people.”
Read article in full