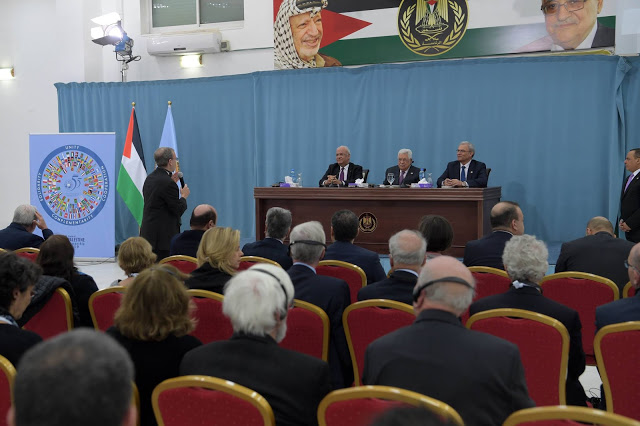 “Israel is claiming that the Palestinian Authority is transferring money to terrorists,” he said. “So I say we do not want to receive this money and every penny we have will be transferred to the families of the martyrs.”

“Even if we only have 20 or 30 million shekels (about 9 million dollars), we will pay them to the families of the martyrs,” said the leader of the Fatah terror group, who uses the nom de guerre Abu Mazen.

Promising money to families of terrorists is a life insurance policy that encourages terrorists to want to die during attacks on Jews.

Also, yesterday, Abbas met with a delegation from J-Street and Democratic members of Congress. He told them how much he wanted peace and how the “peace process” is in danger – because of Israel.

He went on to blame Israel for everything, and described “Israeli violations in the Palestinian territories,”, Israel’s “ongoing attacks on Islamic and Christian sanctities in the occupied city of Jerusalem,” and how the PLO is trying to stop these alleged attacks (meaning, things like Jews visiting Jewish holy sites) by going to international institutions and courts.

He answered questions, but I cannot find any transcript of that, and J-Street doesn’t even admit when it meets with Abbas, for some reason.

The photo above shows J-Street leader Jeremy Ben-Ami asking a question from the group that includes Abbas and Saeb Erekat, under the smiling face of Yasir Arafat.