The story of the Jewish refugees from Arab countries is often described as a success – people who have managed to rebuild their lives and create a better future for themselves and their children. But as this heart-rending portrait by Raphael Luzon of his father shows, the human cost of exile is too often overlooked: 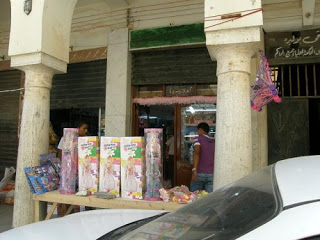 The site of Raphael Luzon’s father’s office in Benghazi (photo: RL for the Jewish Chronicle)

“Exile broke him. The economic and social decline, the polarity of life between Libya and Italy, demolished his existence. The mourning for a lost life never left him, so he remained what he had always been – a Libyan Jew. He took good care of us, and he worked hard to give us a good life and a future. I felt that the man I had admired all these years had left his soul in Benghazi, and I would never see the same spirit again.

“In Italy he haggled over goods as he used to in Libya, but locals would mock him as he tried to be funny. The jokes he cracked fell on deaf ears and would rarely receive so much as a giggle. All his time was spent with Libyans, both Jews and Muslims.

“Every time  he heard someone had arrived in Rome from Libya, he was filled  with an incomprehensible expectation and happiness. He would try every possible way to get in touch with them so that he could hear about the siutation in Libya. Not even once had he expressed his rancour or revenge towards the Libyans: h felt that fate was the culprit, responsible for everything. The situation eventually changed into degradation and  then to depression. After his soul surrendered, his body followed and he became ill with kidney failure. Apart from a brief stint in employment, he refused to work. One a man of wealth, he never would have thought about standing in line at the soup kitchen with charity coupons to get meals for himself and his family. My mother urged him to fight back, but her words fell on deaf ears. He had long ago lost the will to live. “