Al Quds is the largest circulation newspaper in the Palestinian territories.

A friend sent me a week ago an analytical reading of the book “Hidden Khazaria” by the Russian writer and researcher Tatiana Grachova. Since I read the article, I have been intrigued and wanted to read more about the Khazars or the Khazars… When I searched for the name of the writer, I found only a Russian athlete with this name, and no trace of the book in Amazon or other book sites!
But in the end I found the book translated into English. I was more intrigued when the writer was identified as a strategic researcher at the Russian Military Science Center with a Ph.D. Although I still read the book, I wanted to share with my readers some of what I know about the Khazaria empire.

The top class Khazari “Jews” were a ruthless people.

The second class, whose mothers were Jewish, later appeared in Poland and Hungary and merged into societies, including France, Germany, England and Andalusia. While the third class lived in cantons in Europe because they could not integrate into European societies, and some lived in different areas of Russia.

Wealthy Jewish families, like the Rothschild family, spread to Germany and France, and from there went to England, later to establish the Bank of England. From there, they came to America and founded the Bank of America, which had the privilege of being the only place to print and issue the US dollar. Hence their dominance over the British and American economies.

The Jews who arrived in Spain, and were not of the first category, lived under the Muslims in Andalusia, and enjoyed the many advantages that led them to be ministers and secretaries of the kings of Andalusia Arabs, but the strange thing is that the wealthy Jews in France, England and Germany, They waged wars against the Muslims, the Andalusian kingdoms, and spent a lot of money for this purpose, in order to expel them from Andalusia, and in the end expelled Muslims and Jews from Spain to Morocco !!  Jewish money makes us believe that the Jews of Spain were expelled, but they were not Jews, but third-class Jews, who allowed the wealthy Jews to sacrifice them because they doubted the purity of their Jewishness! .. This is the Jewish style through the times of history, in their way of thinking to reach their goals. 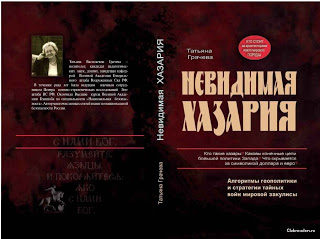 So, according to Al Saud, it was Khazari Jews who were responsible for the expulsion of Muslims from Andalusia.

The book that inspired him to go on this research project is a completely insane antisemitic conspiracy theory. I found a translation here.

Here is only a small section of its table of contents:

PROJECT “KHAZARIA”
Who stands behind the world behind the scenes
The war in the mental space
Discreditation of the existing ideology or history of the state
Depriving people of their history
Forces of historical revenge against the forces of the sacred history of statehood
Khazaria – the chimera State
Belligerence and ruthlessness of the Khazars in the war knew no bounds
Khazaria was a predatory parasitic state
Khazar kingdom vanished like smoke
After Khazaria
Only 2% of modern Jews are Oriental Jews
Totally Khazar roots of East-European Jewry
How can someone go back to a place where he had never been
The idea of a Jewish national identity – fiction
Return of Khazaria
Head of the State of Israel must be a person with roots in Russia
Is creation of a chimera a worldwide solution to the problem?
“To take over the world, we must possess Russia”
ZioNazis commit terrorist acts in the synagogues
Israel becomes the ultimate power of the future
The snake biting its own tail. Anti-Semitism – a product of Zionism
Anti-Semitism was funded by wealthy ZioNazis
The German company I.G. Farben, Director – Max Warburg – ZioNazi
Farben manufactured 95% of all German poison gas
Hitler admitted that he was financed by ZioNazis
Collaboration of Zionism with anti-Semitism has a long history
“The Nazis goes to Palestine”
Zionism wanted to sacrifice all the European Jewry to the Zionist state
Zionist leaders have played a sinister role in the drama of Nazism
Rudolf Kastner and a deal with the Nazis
The European Jews must accept the suffering and death
Genocide of the Jews with Zionists hands
ZioNazis offer military-political alliance with Germany
Anti-Semitism – wei wei wei
Hitler was actually a stooge of the anti-system
The same matrix of Khazaria
U.S. chose the Hazar path – the path of war
“A democratic use of force”
Anti-Semitism is needed so Jews would flee from persecution and go to Israel
Tribe of the Danites in the land of Magog
The southern branch of the tribe of Dan settled on the lands of the Khazars
The coat of arms of the tribe of Dan is a snake
The U.S. dollar and the euro create the foundation of the global financial anti-state
Royal coat of arms of the United Kingdom with the symbols of the tribe of Dan
U.S. military strategy consists of hidden provocations and sabotage
“Star of David” or the Shield of David is forgery
The matrix of the global anti-statehood
Britain promises Palestine to Zionists
This is how the Khazars became what we call today Jews
United States participation in the seizure of Palestine
“If you support terrorists, you are also a terrorist”
“Chimerical nationality Jew is the nationality of a merchant”
“From a political standpoint, we are the aggressors”
Now, after Iraq, this conflict has become a world war
The Tzitz – the golden crown for the Antichrist has been cast
How realistic is it to start building the Temple today
The coming post-industrial era demands the need for a global revolution
“Israeli Empire”
The obsession with revenge
Invisible Khazaria is a global network formation
Mode of operation of invisible of Khazaria – a Thanatocracy (thanatos – death)
“Jewish Communal Register” clearly defined Zionism as a Marxist movement
The most effective is the revolution created by the Chabad emissaries

Yes, this is the type of “scholarly” research that Palestinian thought leaders openly embrace and believe.

Once again, keep in mind that the fact that an unhinged Arab writes a conspiracy theory article in a major Palestinian newspaper does not damn all Palestinians.It tells us something about the newspaper editors, but not much else.

Not a single Palestinian ever publicly objects to both the antisemitism and to the explicit promulgation of absurd lies. They claim not to have a problem with Jews yet virtually every single Palestinian does not reject this hate in their midst. Maybe they don’t believe it themselves (although clearly many do,) but they tolerate and condone it. You will not find a single Palestinian who opposes this sort of hate.

That’s the problem that no one wants to talk about.

And the fact that not a single “progressive” NGO or media outlet, the types that are up in arms over neo-Nazi antisemitism, ever says a word about the explicit and blatant Jew-hatred published in major Arab newspapers every day, damns them as hypocrites and enablers to antisemitism as well.