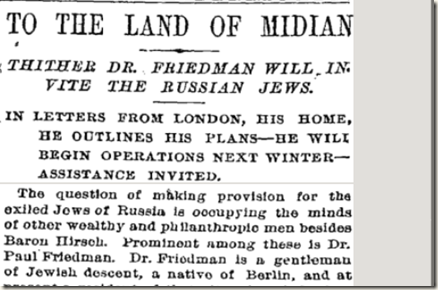 In Ammon News, a writer names Amin Mahmoud describes an episode in the late 18th century where a “Jew” named Paul Friedmann tried to build a Jewish colony in Midian, in what is now Saudi Arabia.

The author elaborates on Friedmann’s life and emphasizes that he wanted to have the Jews involved in building a railway from Egypt to India, which is judged as proof of Jewish colonialist designs for the entire region. Mahmoud goes on to say that the initiative received widespread support and only through the determination of the Ottoman empire was this scheme foiled.

He concludes, “This Jewish settlement attempt at Midian and its counterparts from other settlement attempts in the Arab regions did not take place in ancient times, but took place in the recent past. Everyone in this country is threatened unless all of us shake off the burden of weakness and indifference and face the challenge with determination and strength. It has become imperative that the people of this nation understand the plots against it, and they defend its existence and survival, and do not depend on complacency and surrender, or it will suffer more rupture and loss and become a gossip in the mouths of the greedy and haters. The Zionist threat will not only threaten the Arabism of Palestine alone, but its danger and threat extend to the entire Arab world from its surroundings to the Gulf !!!”

MIDIAN PROJECT, THE, was an abortive, ill-judged attempt at Jewish colonisation in the Midian region east of the Red Sea near the Gulf ofAqaba.lt was led from Southampton 18v by Paul Friedmann,  German Protestant author and philanthropist of Jewish descent, who following consultation with Sir Evelyn Baring (later Lord Cromer), Britain’s representative in Egypt, purchased land in the Midian region on which to establish a Jewish colony leading possibly to a Jewish state. More than 3o continental Jews, mainly refugees from Russia, and an accompanying party including Friedmann, sailed for Suez on board a steam yacht named Israel that he had purchased in Glasgow. They set up camp in the Sinai and prepared to cross into Midian. But owing to the intending settlers’ dislike (especially after an expelled member had died in the desert) of the martinet-like Prussian officer who Friedmann put in charge of the group, as well as to the hostility of nearby Turkish troops and the Egyptian government’s consequent insistence that the project be abandoned, the settlement lasted only two months. In new of Baring’s involvement, the Egyptian press angrily denounced the project as a British attempt to occupy Midian, and a war of words erupted between Britain and Turkey. Friedmann was left demoralised and financially ruined.

So a Jewish convert got a ragtag band of people to commit themselves to a bizarre scheme of creating a community in the desert, and it lasted two months. Not exactly evidence of Jewish designs on the entire region!

But why let facts get in the way of a good narrative?