The festival of Passover evokes poignant memories for Baghdad-born Joe Samuels, as he recounts to Nurit Greenger in the Jerusalem Post (with thanks: Sami and Lisette):

Of all the Jewish holidays we celebrated, Passover was the one I waited for impatiently. Customarily I was given a set of new underwear, trousers, white shirt, a pair of shoes and socks and I felt so clean and new, though the trousers were always too long, the shirt too big, and my feet were running free inside my new pair of shoes.

The atmosphere at home was a mixture of excitement and joy with some tension added. The Passover preparation, the intense cleaning, began soon after the festival of Purim ended. My mother and her help scrubbed, cleaned in boiling water and washed everything in sight even the drapes.

As a kid I was fascinated by the Matzah baking in our home. First my two aunts and two helpers prepared the special dough. Then, equipped with rolling pins, they gathered around a large upright wood-burning clay oven ready to bake the unleavened dough to a crunchy, thin Matzah.

On the night of Passover, our table was set up lavishly, with fine china, fancy cutlery and wine cups all set on an elegant tablecloth.I remember my father returning from the synagogue; to me he looked regal in his white suit, kind of radiant. Every member of the family wore a white shirts and of course, I was dressed up in my new clothes.

It was customary to invite guests to join us at our Seder-Passover dinner table and fulfill the commandment that orders us to make sure no one remains hungry. And there was always somebody invited to celebrate with us. To start the Seder, my Dad blessed the wine and then blessed us. One by one we kissed my Dad’s hand; then we also kissed my Mom.

After the ritual of washing hands, we sat down to read the Haggadah, the tale of the Israelites’ exile from bondage in Egypt and their exodus out of Egypt to freedom, a story of redemption that took place some 3,500 years ago. We read the Haggadah from beginning to end and sang ritual melodies in Hebrew, a language I didn’t understand. I followed the reading, along the Arabic translation, my mother’s tongue, with joy.

With so many of us around the table celebrating, I waited impatiently for my turn to sing and I remember always singing rather loud and with enthusiasm. For me, the best part of the Seder, the one I waited for the most before the festive dinner was served, was the eating of the Charoset, sweet dip, a mixture of date syrup and crushed walnuts in which to dip the bitter herbs in memory of the mortar used by the enslaved Israelites to build for Pharaoh, which we ate with romaine lettuce and crunchy Matzah.

When we wished each other “Next year [we will celebrate] in Jerusalem” we knew the Seder evening ended with hope. Passover celebration was the most joyous time of the year.

Passover of 1941 was different. A year earlier we moved out of the old city to a larger house near the Tigris River.On April 3rd, a pro-Nazi coup, masterminded by the German Consul Dr. Fritz Grobba, took control of the country. King Faisal II and his cabinet escaped and Rashid Ali al-Gaylani became the prime minister. My father and my older brothers appeared troubled. Anxiety overcame the Jewish community. Within days, some Jews were arrested and imprisoned.

In the year 1941 Passover fell on April 12th. Our Seder was cheerless and gloomy. I was a ten-year-old frightened kid. On May 31st, British troops arrived at the outskirts of Baghdad, but did not enter the city. Al-Gaylani and his accomplice, Haj Amin al-Husseini, the Grand Mufti of Jerusalem, fled the country. 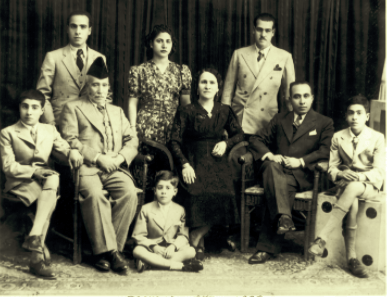 The Samuels family in Baghdad

On June 1st, crowds aided by police and soldiers went on a rampage looting and burning Jewish homes and businesses. They murdered men, raped women and girls and then slit their throats. We locked and bolted our doors and put our faith into action, we prayed. The mob did not reach our area but my uncles’ home in the old city, were ransacked. The next day, on June 2nd, British troops entered Baghdad and put a stop to the massacre. The official Iraqi government count was 179 Jews murdered and 240 wounded. There was not one act of resistance or fighting back; there were no arrests or convictions. No Jew would file a claim against a Muslim, for fear of retaliation on his or her life.

I must admit that if it were not for the courage and heroism of some Muslim men who protected and sheltered their Jewish friends the Pogrom on the Jews – the upheaval that became to be known as the Farhud – would have been far worse.

Life went back to normal or so it seemed to be, but the future Passover nights were never the same. The safety of the Jews could not be taken for granted nor be guaranteed. I already sensed that I would not be able to stay and build a future life in Iraq. The alternative, I studied hard and dreamt of emigrating to America after I graduated high school.

Iraqi Jews and the founding of the state of Israel

Passover of 1948 fell on April 24th. A thick black cloud of fear hung over our festivities. Baghdad’s newspapers and radio station and street demonstrations were calling for war against the upcoming establishment of the state of Israel. While we were celebrating in our hearts the re-establishment of a Jewish state in 2,000 years, we were uncertain and terrified if Israel would survive; we were also very uncertain about our future in Iraq. On May 15th, 1948, the Iraqi army, together with the armies of Syria, Jordan, Lebanon and Egypt, went into battle against the newly declared State of Israel. Radio Baghdad jubilantly lied, announcing the victories of Arab armies, destroying Jewish cities and eliminating any resistance. Secretly we listened to the BBC radio waves from London that announced the Arab armies were at a stalemate and many Arabs living in what was now called the State of Israel were fleeing to neighboring Arab countries.

After the Arab states, including Iraq, failed to eliminate Israel, the Iraqi government turned against its Jewish citizens, especially the youth. Many were picked up, accused of Zionism, tortured and imprisoned. This violence on the Jews culminated with the indictment and public execution of Shafiq Adas, a prominent Jewish merchant. When I saw the picture of his body hanging, on the front page the Al Zaman newspaper, I went into panic.

A few months after I graduated high school, in June of 1948, I received my student visa to the United States. I already had my passport and the last obstacle was to get an exit visa, a permission to leave Iraq. My dream was about to materialize.

It is not over till it is over

In 1949 Passover fell on April 13th. Anxiety and unease filled the air. Many young Jews were arrested during the last few months; a good friend’s brother was taken away from his house at night. Family contact was not allowed and stories of torture and the disappearance of many Jewish youth was the reason our hearts were filled with fear. I was still hopeful and anxiously waiting to receive my exist visa and be on my way to America.That was my last Passover in Baghdad. Weeks and months passed. Finally, I was notified that in order for me to get my exit visa I had to deposit 3,000 Dinars, as a guarantee that I would return to Iraq after completion my studies. The average salary for a middle class family was 4-to-5 Dinars a month; 3000 Dinars were equal to a million dollars at that time. It was a punch to my gut. My bubble burst. It was time for me to get out of Baghdad.

In December 1949, I traveled with my younger brother to the port city, Basra, and from there I was smuggled out to neighboring Iran. On March 2nd, 1950, one day before the festival of Purim, I kissed the ground when I landed at Lod Airport near Tel Aviv, Israel. I chose to leave my home city, Baghdad; behind I left my culture and my family history of 2,600 years; I left behind close to heart Jewish friends as well as some Muslims and Christians. I left behind many memories of confidence and fun, of fear and anxiety, of despair and hope. I left behind my past and took away with me my future and my dreams.