TOP NEWS
http://jewishrefugees.blogspot.com/2017/11/jews-were-victimised-after-six-day-war.html
Today is 30 November, the date designated by the Israeli Knesset to remember the 850, 000 Jewish refugees forced from Arab countries. The date is being marked in Israel and worldwide. Writing in BESA Center News Edy Cohen recalls the predicament of Jewish communities in the aftermath of the Six Day War, a plight which Arab regimes tried to conceal.

Much has been written about the historical marginalization of the 900,000 Jews expelled from Arab states in the wake of the 1948 War. Few know that the June 1967 War played a similar role in accelerating the final demise of these historic communities. It is high time the international community rectified this longstanding injustice by ensuring that these refugees are fully compensated for their suffering and stolen property. 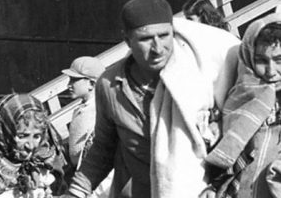 Fifty years after the June 1967 War, the Israel State Archives in Jerusalem released scores of classified files related to this historic event. While most deal with the war and the events that led to its outbreak, some address the predicament of the Jewish communities in the Arab states during and after the war. The picture that emerges is one of pogroms and persecution, at times orchestrated by the government, at times through spontaneous eruptions that occurred with the tacit support of the authorities.
This maltreatment occurred in almost all Arab states, though the level of violence differed. In Tunisia, Morocco, and Lebanon, for example, the authorities protected the Jews from the rampaging mobs, while in Syria and Yemen, there were isolated attacks on Jews. The most severe persecutions occurred in Libya, Egypt, and Iraq. Israel refrained from any direct public action so as not to give credence to the depiction of these Jewish communities as fifth columns serving the Jewish state’s interests. Covertly, however, through its Washington, London, Paris, Rome, Geneva, Brussels, Ankara, and Lisbon embassies, the Israeli Foreign Ministry acted on behalf of these communities.
The American Jewish Congress, the American Jewish Committee, the UN, and Jewish communities in the West were also enlisted to help out with protest gatherings and media publicity about the Jewish predicament in the Arab states. According to the documents, the Arab regimes tried to conceal the Jews’ persecution from foreign eyes, to deny any governmental involvement in the violent acts that were exposed, and to impose strict censorship so as to ensure that such acts were not publicized.
Read article in full