Eleven Jews born in Egypt have applied for Spanish citizenship. Three are Samy Ibrahim, his brother and his father, among the last Jews living in Egypt. Fascinating article on the history of Jews of Sephardi origin in Egypt in Al-Monitor:

According to a list published in a 1948 Spanish law anticipating the end of the Capitulations in Egypt and Greece the following year, at least 265 Sephardim, meaning originally from the Iberian Peninsula, had been under Spanish protection since Ottoman times.

The list, the only one of its kind ever published, shows that 123 of those Sephardim lived in Cairo and the remaining 142 in Alexandria and Port Said. Jews of other origins and those who received protection after 1914 are not listed. After Ibrahim found the documents of protection of his family, the Spanish authorities in Egypt suggested he apply for Spanish citizenship in accordance with a 2015 law granting citizenship to the “sons of Sepharad,” a reference to the descendants of the Jews expelled from Spain in the late 15th century. The window for application closed on Oct. 1. 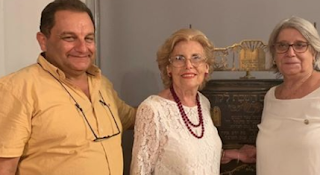 At first, “it was not in my mind to apply,” said Ibrahim. But he came to think, “If I am defending the Jewish identity, why not seek the origin?” he wondered. “From then on, I started to give real thought to my origins.” Today, all Jews in Egypt, thought to now number around 10, are of Sephardic origin, Ibrahim said. Historically, the differences of origin, culture, language, religious rites or social status made the Jews of Egypt one of its most diverse minorities, yet Sephardim were always in a clear majority compared with the Ashkenazis and Karaites.

The first Sephardim started to arrive in Egypt by the end of the 15th century. But from 1897 to 1907, there was a major immigration during which Ibrahim’s grandfather came from Istanbul. A source in the Spanish Ministry Foreign Affairs told Al-Monitor that a total of 11 Jews born in Egypt had applied for citizenship. Of them, the Spanish Ministry of Justice confirmed to Al-Monitor that nine retain Egyptian nationality.

Yet only Ibrahim, his brother and his father — all of whom applied following Ibrahim’s initiative — still live in Egypt, according to the official at the Ministry of Foreign Affairs. To meet all the conditions required to obtain Spanish nationality, Ibrahim had to learn the Spanish language and history in Cairo while he was putting the pieces of his familiar story together, especially that of his grandfather’s side, information that was crucial to proving his Spanish ancestry.