The New York Times did not find it worthwhile to report on a million Israelis being bombarded with hundreds of rockets on the first page.

In fact, here is what the PDF of the first page looks like (and I’m pretty sure the bottom is on Page 2): 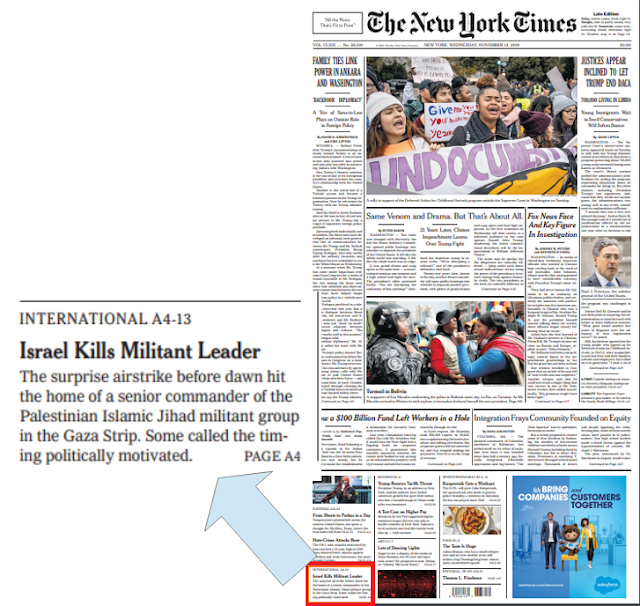 The news story snippet implies that Israel had no reason to kill the terrorist – and therefore, the rockets being shot into Israel are justified.

In a surprise airstrike before dawn on Tuesday, Israeli forces killed a senior commander of the Palestinian Islamic Jihad militant group in the Gaza Strip, setting off waves of retaliatory rocket attacks that immediately raised fears of an escalating new conflict.

The timing of the attack, after a period of relative calm along the border and amid a protracted, high-stakes negotiation over who will lead Israel’s next government, led some critics of Prime Minister Benjamin Netanyahu to charge that it was politically motivated. Mr. Netanyahu insisted that the timing was dictated by Israel’s security chiefs, whose recommendation he had merely endorsed.

Israel described the Gaza commander, Baha Abu al-Ata, as a “ticking bomb” who was “responsible for most of the Palestinian Islamic Jihad’s activity in the Gaza Strip.” Islamic Jihad said that the commander’s wife, Asmaa Abu al-Ata, was also killed in the 4 a.m. missile strike.

Before 6 a.m., militants in Gaza began firing barrages of rockets toward southern and central Israel from the Palestinian coastal enclave. Islamic Jihad called the Israeli strike “a declaration of war against the Palestinian people” and said, “Our response to this crime will have no limits.”

That’s it. It doesn’t even mention that some rockets exploded on factories, roads and houses. No, to the NYT, these rockets are being intercepted by Iron Dome and no real danger, and Israeli fears not worth reporting on.

Media bias can be seen in what is not reported and where the stories are placed. In this case, 200 war crimes terrorizing a million people are not worth mentioning.