But it wasn’t an Israeli missile. It was a missile from a Gaza terror group, almost certainly the one in this video:

Video from the @Reuters livestream via @RelicHq showing the errant Palestinian rocket falling short and hitting the Palestinian Independent Commission For Human Rights building in Gaza. Not an Israeli airstrike. pic.twitter.com/P76Dx0RyIU

The damage from the rocket also indicates a Qassam-style rocket, not an Israeli missile: 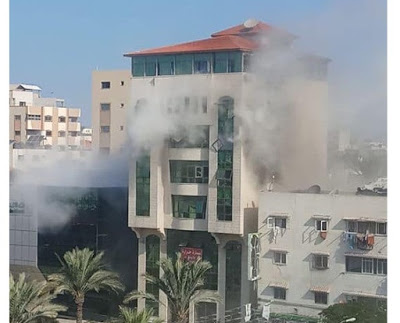 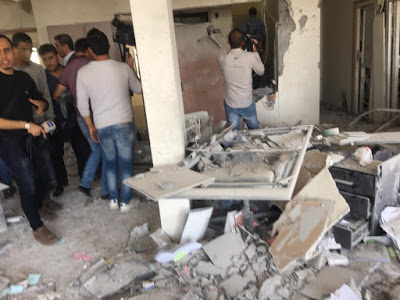 An eyewitness confirmed it.

Even the ICHR website deleted its original accusation that it was an Israeli missile strike, although it stops short of even implying it might be from Islamic Jihad.

When the evidence that Amnesty was wrong became overwhelming, it tweeted this:

Isn’t that something? An unfounded accusation that Israel bombed a human rights group gets tweeted with no caveats whatsoever, but when it is discovered that a Gaza terror group shot the rocket, now Amnesty wants an “investigation” – one that it had no desire to do at first when Israel could be blamed. And Amnesty wants the world to know that it still could have been from Israel, even though Israel denies it and Palestinian media stopped all reporting on the incident, following Hamas orders.

Back in March, the ICHR offices and staff were indeed attacked deliberately. By Hamas.

The Ramallah-based Independent Commission for Human Rights (ICHR) said Hamas forces attacked its staff in Gaza because they were doing their job of monitoring and reporting Hamas crackdown on the street protests.

ICHR director Ammar Dweik said that Hamas forces attacked and severely beat the director of its Gaza branch, Jamil Sarhan, and its attorney, Baker Turkman, and seized their cellular phones.

Back then, Amnesty did not say a word.

No wonder that Hamas media is happily publishing Amnesty’s anti-Israel statements. Hamas and other terror groups in Gaza accurately see Amnesty International as their allies. (This particular article was taken down in the past hour for some reason.)